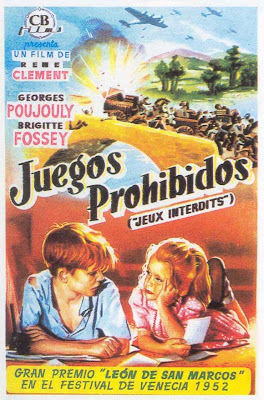 A movie involving the relationship between a little girl and a little boy would not normally be my first pick but I recently came across the Criterion dvd of this French classic at an extremely low price. To pass it by would have been just plain dumb on my part and I have to admit I am glad I snatched it up. 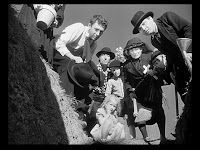 Forbidden Games depressingly tells the story of an orphaned five year old girl who's parents were shot down right in front of her by a Nazi air-raid. The scene is intense and horrible. We witness her mother and father being gunned down from the German plain above. The little girl takes off running, clutching onto her dead dog who also fell victim to the Nazi attack. The terrified girl runs into a little boy who takes her back to his parents farm house where she will learn the meaning of life and death, friendship and hatred.

Forbidden Games surrounds itself with death. The two children who immediately find a deep friendship try to understand the world around them that is run by the adults. The meaning of life and death. The purpose of religion. Everything seems to be a giant contradiction. Or at least the way it is explained by the adults.

Forbidden Games can be cruel and sad but it is also humorous and touching at the same time. It shows the innocence of a child being corrupted by the warped world of adulthood and the ending is as emotional as the opening.

In my personal favorite scene we see the little boy being slapped around by his angry father. His father forces the boy to say his prayers but between each sentence the little boy mumbles, shit! Fuck! Asshole! under his breath. Moments later the boys older brother will die in bed and now he prays for real but is it out of faith or is it fear. There is all sorts of religious ideas going on in this movie and I suppose the viewer can take it in the direction they believe. I personally feel that Forbidden Games is a message on the contradiction of religion and its affect on children.

Fans of this movie should check out Come And See which I personally prefer over this 50's title. The two films have a lot in common but in my humble opinion Come And See is more relentless and more horrible and more touching. Still both films are well worth a watch. 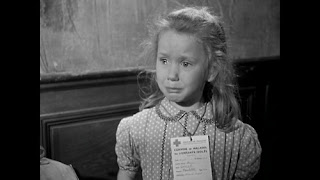