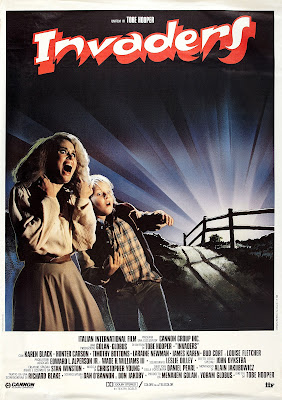 Yep, even in the 80's remakes were just awful. This one had just about everything going for it. Dan O'Bannon (Return Of The Living Dead) gives us the new screenplay and Tobe Hooper the director of The Texas Chainsaw Massacre is living out his life dream and directing the remake of his childhood favorite movie.

For those familiar with the 1953 classic, the story is almost identical. A science fiction nerd looks out his window and witnesses a flying saucer landing over the hill behind his house. The boy takes off running to warn his parents what he has seen. Naturally they don't believe him and send him back to his room. When he wakes in the morning daddy isn't acting quite normal. The Invaders From Mars have taken over dads body and its not long before they have mom as well. The school teachers, students, police and townsfolk all become a walking disguise for the aliens and it is up to the kid to save the day.

Karen Black plays the school nurse and is the only one who believes the little boy. Together they enter the flying saucer and fight the monsters that are inside.

The original Invaders From Mars may be campy and unintentionally funny by todays standards but in 53 that was a scary movie for a kid to see. One morning you wake up and your dad is no longer your dad. Your mom is not your mom. Your teacher is not your teacher and they all want to harm you. Who would believe you. The kid feels alone in a world of adults and monsters. It is a nightmare come true and the thing that made the original work so well was the fact that it was told through a little kids point of view. Even the camera angles are all taken from a low point of view. It is very clear who that movie was marketed for. Young monster-kids! The 1980's remake doesn't work so well for anybody.

In the most memorable scene Louise Fletcher who we all remember best as Nurse Ratched is One Flew Over The Cuckoo's Nest eats a frog. I liked this scene a lot because just like Ratched, Fletcher plays yet another total unlikable twat. Seeing nurse Rathed eat a frog brought me great pleasure. Other then that James Karen who plays Frank in Return Of The Living Dead shows up as a over acting military man which was pretty funny but everything else is pretty bad. It is way to comedic and even the monsters look like big dumb, useless piles of shit. The kids grandmother could probably out run these things so I don't see why he is so affraid. The sets are pretty elaborate and we do get some big explosions but all in all this 80's remake is just a waste of time.

It really confuses me how someone like Tobe Hooper can go from doing something like The Texas Chainsaw Massacre or even Eaten Alive to silly 80's shit like this. Stick with the original. Even if it was marketed for kids it is more intelligent then this nonsense.