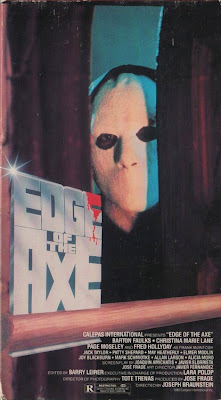 This late 80's Slasher comes in just a step above the average shot on video crap from this time. There is nothing very memorable to speak of with the exception of one semi graphic murder scene in which a street walking female is chopped into over and over again with an axe.

Edge Of The Axe tries its best to be interesting but fails miserably. The characters are boring. The dialogue is boring, the story is boring and there just is not enough axe-em-up mayhem to keep the viewer happy through all the bad romance scenes which eats up most of the run time. You would think due to the cool poster that Edge Of The Axe is going to be a pretty trashy slasher but this just isn't the case. The film focuses on the love lives of two couples and some of the females aren't all that bad to look at but the film doesn't even have the decency to offer up and naked flesh. However we do have a character who looks a lot like Jim Carrey which is kind of interesting I guess because no matter how bad Edge Of The Axe is, it is still better then anything that Hollywood boy Jim Carrey has ever done. We also have a case of life imitating art here. Edge Of The Axe could be considered a sci-fi movie if you wasn't because it predicts the Internet, Its pretty funny to see this early version of a fictional Internet, all of which is in Dos Prompt.

It also comes to a climax with a twist ending. I would have preferred a twisted ending but hey maybe its to much to ask for some mindless violence in my slasher flicks. The pile of 80's slasher films is pretty damn big. If you pass this one by you really wouldn't be missing much. However the German title for this one is pretty cool. Axolution.