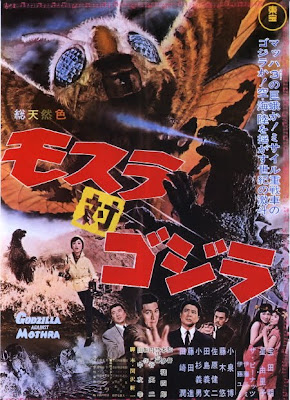 Mothra is back and this time she will take on Japan's most feared monster Godzilla. I always love trying to explain these movies. They are just to insane for words.

Tokyo is hit with a violent storm and a giant egg washes upon shore. A group of greedy business men buy the rights to the giant egg and they drain a part of the ocean to incubate the giant mysterious egg. I guess greed pisses Godzilla off and he is resurrected from beneath the earth which once was covered with water. Godzilla throws a hissy fit and destroys a bunch of shit. Then the people of Tokyo are visited by two twins whom stand about four inches tall. The twins inform the people of Tokyo that the egg belongs to "The Thing" which I guess is the Japanese way of referring to a giant monster moth known as Mothra.

I don't know why Mothra hangs out with these small twins. If I were Mothra I would be a bit annoyed by being called a "Thing". Anyway, of course the people do not give Mothra's egg back and this makes The Thing really pissed off. So Mothra comes over for its egg but Godzilla fucks everything up. Mothra and God go to war and Mothra pretty much kicks the shit out of God but Mothra is old and sick and uses to much energy in the fight against Godzilla and just sort of kicks the bucket but that's okay because Mothra's egg is about to hatch. Out from the egg pops two giant baby larva. There is no way that these babies are gonna beat Godzilla right?

Well I guess looks can be deceiving because these little monsters can really fuck shit up. One of them bites into God's tail and apparently causes a great deal of pain. Next they shoot a spermy like substance from their mouths which act like a giant spider web and Godzilla gets all tangled up.

Mothra Vs. Godzilla is ridiculous as usual. You really need to have the attention spans of a child to enjoy these things. Lucky for me I was blessed with a childish mind and find Mothra and Godzilla to be pretty damn fun.

See a giant moth fight a giant lizard. See giant eggs and giant caterpillars. See singing twins that might have been created by Dr. Pretorious from Bride Of Frankenstein. See the Japanese soldiers come up with the brilliant plan to catch Godzilla in a net. See Godzilla's head catch fire. This one even comes complete with some blood in a scene where a man has his nose smashed in during a fist fight. Its all here in Mothra Vs. Godzilla. Its good, dumb, fun!