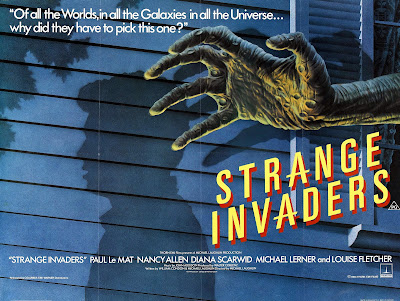 Strange Invaders is a 1980's homage to 50's science fiction movies and a lot of the film takes place in the 50's. The wardrobe, haircuts and cars are all somewhat believable but the film falls short with its Hollywood type style and {PG} rating. Of course most of the science fiction films of the 50's would be considered {PG} today but those films also came off extremely independent. They didn't seem completely commercialized which is what we get with Strange Invaders. It just looks like something that should be played on television.

Speaking of the way it looks, For some reason the print that I saw has very soft and washed out color to it and I am not talking about the scenes that are supposed to look like we are in the 50's. The whole movie is pretty soft and it was even a bit blurry. It also lacks that level of camp value that we all love the 50's horror/sci-fi flicks for and instead offers up some very early and very bad computer graphics. So those who argue that Strange Invaders is a great homage to those old black and white movies from the past I couldn't disagree more. Sure it tries but it just doesn't quite make it. The cast on the other hand was okay but the characters are all very boring. Louise Fletcher who I remember best from One Flew Over The Cuckoo's Nest shows up as FBI agent, Diana Scarwid (Mommie Dearest, Rumble Fish) plays an alien mother of a child from earth and Brian De Palma favorite Nancy Allen (Dressed To Kill, Carrie) takes on what has to be her most unsexy role of all time as a short haired, shoulder pad wearing magazine publisher.

Strange Invaders does have some nice special effects. Faces are ripped off, children melt, and the aliens spew out this yellowish green blood that reminds me of Phantasm. We also have a bunch of car explosions and a giant flying saucer. However this is not enough to save Strange Invaders from being just another piece of crap from the 80's. Don't waste your time. 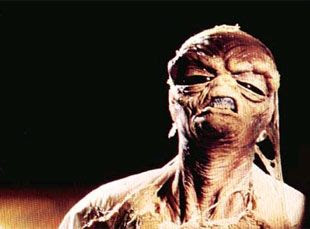