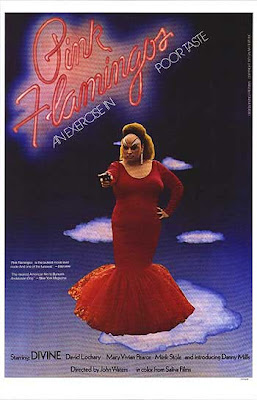 "There are two kinds of people in this world. My kind of people and assholes!" This film is definitely for my kind of people. John Waters, The Pope Of Trash brings us "The filthiest people alive" in this timeless trash flick.

Troma Studios may be chaotic but "it is shit compared to the filth we have in our minds" I like to think of John Waters as an assassin of the hippie movement. John Waters, Charles Manson and punk rock all point out the end of the love generation for me and it is that assassination of the peace generation that spews across the screen in pink flamingos. If only John Waters was aware of the pre punk movement that was happening in New York City. The New York Dolls, The Dictators, The Dead Boys, The Ramones or even Iggy Pop outside of NY would surly have made their way onto the soundtrack. It is that attitude of Armageddon and destructive, violent youth and artistic individuality that is so ironically put on the screen. These people are not hippies. They are punks. They just didn't know any such animal existed. 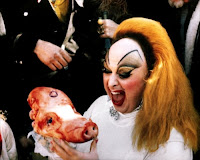 When you watch Pink Flamingos it is impossible not to see the anger in it. The discontent for social standards and the boredom of television and lame media. This is an attack on everything that the old hold close to heart. It is an attack against the old but it is also an attack against the young. The out dated hippies, the moralists and anybody and everybody with out a sense of humor. It is pure humor in bad taste and if you are an uptight fascist who can't handle the sickness of humanity then this film is not for you.

Devine, The queen of trash film or should I say drag-queen of trashy film plays... himself, the filthiest person alive. Meanwhile two jealous assholes, Connie and Raymond plan on destroying Devine and her reputation. They believe that they are the filthiest people alive.

Raymond enjoys exposing himself to young girls and stealing their purse. Connie runs an illegal baby ring. They kidnap young girls, chain them up in the basement and have their fertile servant Channing rape them. They become impregnated and they sell the babies off to lesbians. They also push heroin on middle school students. Devine is living out her political dream through sheer bad taste. She steals, fights, drives fast and all that good juvenile type stuff. When Connie and Raymond send Devine a piece of shit in the mail for her birthday the battle of filth begins. Lets just say things wont end so well for Connie and Raymond.

This movie comes complete with one of the weirdest sex scenes you will ever see. A man rapes a girl and forces her to hold his pet chickens. The chickens are killed during this scene. Its weird, funny and disturbing at the same time. We also get to see a man sing the Trashmen song Surfing Bird with his asshole. We have she-males, drag-queens, lesbians, fags, a very disgusting blowjob scene and it is all finished off with some shit eating. Every single moment in this movie is disgusting and if you can stomach the most disturbing of horror movies it doesn't exactly mean that you can bare your way through this brand of artistic smut.

Take it or leave it. Love it or hate it. Either way... Go fuck yourself!