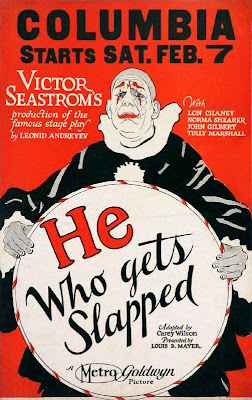 When it comes to Lon Chaney it is never easy to choose but if I had to Laugh Clown Laugh is probably my favorite of all Chaney movies. So when I learned that he also played a clown in He Who Gets Slapped and many considered the character to be more sinister I had to see it. 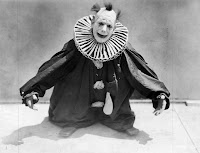 This time Lon Chaney plays a scientist named Paul. Paul has two loves in his life. His work and his wife. It just so happens that Paul has proven his theory on the origins of mankind and he is going to become rich and famous. Well at least he would be. Paul's wife has been cheating on him with his best friend and now the two will give him one final slap in the face and steal his work and claim it to be their own discovery. Paul sinks into an awful depression and joins the circus as "He" the clown who gets slapped. He is gaining a lot of attention and is becoming the main attraction of the town. Paul has been slapped in the face by his loved ones and laughed at by everyone else. At least now he is getting paid to be slapped and laughed at by complete strangers.

The only thing is that underneath all of the makeup. He is plotting out his revenge. When his old friend no longer had a use for Paul's wife he left her for a young girl in the circus. This just so happens to be the girl that Paul or He is falling in love with. He refuses to be slapped again and he decides to kill the man who has brought him so much grief.

This time around Lon Chaney uses a circus lion as his murder weapon. For those familiar with The Unholy Three and the epic killer ape ending, it was most likely heavily influenced by this film which would be released on year earlier. The final fight is more emotional then it is thrilling. Lon Chaney pours it on thick as he gets revenge. "We will see who will have the last laugh".

The truth is I still prefer Laugh Clown Laugh over He Who Gets Slapped. While I am glad I picked this one up and very happy to have added to my collection I am still yet to find a Chaney movie that brings the amount of emotion that Laugh Clown Laugh does. None the less Chaney fans will not be disappointed by this one. It is artsy, metaphoric, emotional and creepy.

Email ThisBlogThis!Share to TwitterShare to FacebookShare to Pinterest
Labels: He Who Gets Slapped, Lon Chaney, Revenge Flicks, Silent