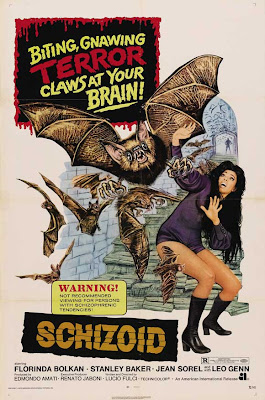 A Lizard In A Woman's Skin is the very first of Lucio Fulci's Giallo's and it really does have a nice look to it. The cinematography is great and so is the lighting and the sets. Even the murders are cool but there are definitely some key elements which knocks this one down a few pegs.

As time went on Lucio Fulci's films would get more and more gory and they would also make less and less sense. It was almost as if the Italian Godfather Of Gore just said to himself, well the audience wants gore and they don't care about plot, so fuck it! This film however makes perfect sense, the only problem is that it is just so god damn elaborate that you have to be hopped up on speed and not blink once to follow it. I always hated when mystery movies and especially Giallo flicks are over complicated and that is exactly what we have here.

It really is a damn shame too because A Lizard In Woman's Skin has a lot going for it. It has some amazing scenes. My personal favorite shows a girl being chased through an old church by a psychotic killer with a knife. It truly is a heart pounding scene and Fulci even manages to throw bats and a sniper into the mix and that's just fucking awesome. Then we have the nasty split-dogs scene where we see a bunch of white dogs split down the middle with a bunch of tubes hooked up to them and red gore spilling all over the place. The film is loaded with female nudity including some hot lesbian action and it also has a very hippiedellic vibe to it. Then we have some crazy images of a giant flying swan with a hole in it. So we have tons of really cool things going on.

Its all just very unfortunate that we are forced to sit through ten million twists and turns and I personally can never remember the final outcome even days after viewing the film. Still I guess this is nothing new to Giallo fans and those who would follow Lucio Fulci throughout his career shouldn't be to fazed. After all it is close to impossible to make sense out of the majority of his movies without hard drugs or at least a strong attention span.

Despite the confusion of the plot A Lizard In Woman's Skin well worth the watch for the gore and camera work alone. 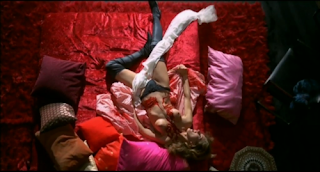