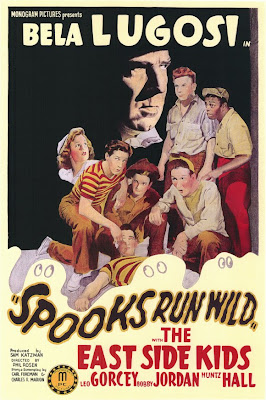 When I think of The Bowery Boys this is the most memorable of all the movies. Perhaps its the fact that they meet Bela Lugosi. Perhaps its the title. Whatever it is, Spooks Run Wild is the first one that comes to mind. 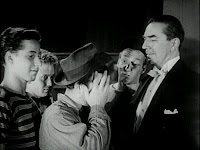 In this 65 minute movie The East Side Kids are taken from the big city and sent to a summer camp. They sneak off in the middle of the night to meet a blond bimbo soda-jerk for a date. Apparently in the 40's teenage boys joined giant mobs for a date with a girl. The Bowery Boys end up getting lost and cutting through a cemetery where one of them is filled with buck-shot by a shotgun wielding madmen. They take off running and find themselves at an old spooky mansion which in inhabited by none other the Mr. Dracula himself, Bela Lugosi. It is your typical 40's cat and mouse run through the old mansion with Lugosi hot on the tail of the teenage boys. In one of my favorite moments The Bowery Boys decide to stop running and do what they do best... "Clobber him". I found it quit entertaining to see a bunch of juvenile delinquents jump Bela Lugosi. 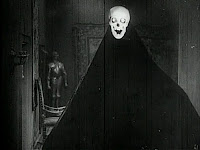 From here we get the oh so familiar gags and goofs that pretty much took place in all of these old horror/comedies. Ghosts float about, spiders drop from the celling, skeletons roam around, zombies walk and Bela Lugosi pretty much acts the way Bela Lugosi always acts. We get some 1940's racism thrown about which can be kind of funny depending on how sensitive you are and it all comes complete with a sort of twist ending.  Spooks Run Wild is very short. It runs just over a hour at 65 minutes and it goes by pretty quickly. It never tends to get to slow or bore. Its cheesy, its not politically correct and it serves as entertaining nostalgia.

I would say the best audience for this flick would be anyone who digs the Abbot And Costello horror outings and lovers of the weird and bizarre wouldn't mind adding this crazy title to their collection of the strange. 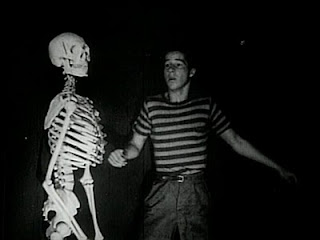