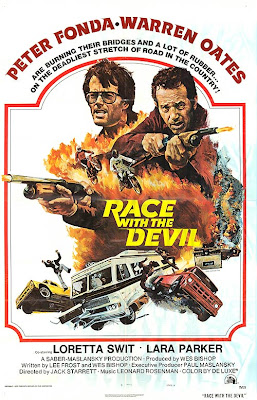 Race With The Devil is a strange little {PG} horror flick from the 70's. It almost seems as if it were a made for television movie. If it weren't for the foul language at times it could totally pass as a made for t.v. flick. They even go as far as to blur out the female nudity in one scene which is very weird because I can't really see Race With The Devil really appealing to a female audience, so why not throw the men a bonus or a boner for that matter.

Peter Fonda (Easy Rider, Wild Angles) and Warren Oats (The Wild Bunch, Bring Me The Head Of Alfredo Garcia) pack their wives and hit the road in their big mobile home camper for the vacation of their lives. The plan is to go from Texas to Colorado but the trip becomes a trip from hell as they are terrorized by blood thirsty satanic killers.

Race With The Devil is a classic example of being in the wrong place at the wrong time. Fonda and Oats are getting good and drunk and talking about whatever when they witness a Satanic sacrificial offering. The only problem is that the Satanists know that they were witness to the murder and now it is a case of sweep and clear. All witnesses must go.

This movie is alright as a time passer. Most of the runtime is eaten up by car chases and stuff like that. We get all the cool car explosions that one would expect from a film like this and more. In one amazing scene a car flips at high speeds somewhere around 19 times. Trucks crash through barriers and fall off bridges and we basically just have a bunch of crazy stunts and vehicle destruction. Fonda fanatics will be happy to know that there is some motorcycle shenanigans and Warren Oats takes a nasty spill off a bike in one scene. Race With The Devil also offers up quite a bit of shoot-em-up mayhem with shotguns being the weapon of choice but we also have stabbings, a puppy is strangled and hung up as a warning. We have fun with fire, hillbilly bar fights and just about everyone in the world seems to belong to a Satanic cult.

In my personal favorite scene we see Peter Fonda wrestle with killer rattle snakes. Watching Fonda smash the shit out of rattlers is always high in entertainment but the film really could use some help in other areas. As I mentioned Race With The Devil is rated {PG} which is always a bit of a let down but even more importantly is how far fetched it all is. These vacationers travel from city to city and everywhere they go they are taunted by more members of the Satanic family. Everyone from librarians to police officers are all part of the cult and I really just do not buy into all of this. Then there is also the fact that the victims never decide to just go home. They are so dead set on continuing the trip that they are willing to die? To say the very least the movie is far fetched but luckily for me I can put some of these things behind me and just indulge in the car madness and Satan worshiping exploits.

A good time waster and braincell waster as well. If you are looking for a more believable tale of the same sort then you should of course stick with The Hills Have Eyes which would come out two years later and use cannibals rather then Satanists.

Email ThisBlogThis!Share to TwitterShare to FacebookShare to Pinterest
Labels: On The Road, Race With The Devil, Witch Flicks And Evil Cults