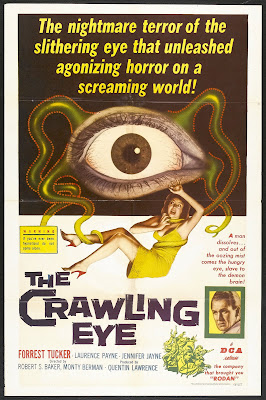 Whats the perfect way to start off a 50's monster movie? With a decapitation of course. Decapitation seems to be running theme with The Crawling Eye and for that reason alone the film should have been double billed with 59's The Monster From Piedras Blancas. Giant 50's monsters and severed heads. How can you go wrong?

Despite the rolling human heads, The Crawling Eye also known as The Trollenberg Terror is all over the place. There is a radioactive cloud at the base of a Swiss mountain. It is being studied by men of science but little do the scientists know that within the radioactive cloud there are giant monsters with one big eye and tentacles with a grip of death. It is these monsters that are to blame for all of the beheadings in the area but to take things just a bit further these monsters have the ability to communicate with humans telepathically and control them. They send one man into an axe wielding, decapitating frenzy of murder and violence but for some reason they never seem to control those who are attacking them. 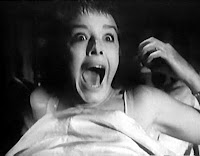 The Crawling Eye is good campy fun from the late 50's and really delivers on the goods but it tends to slow down at times and get just a bit boring. However it is all made up for with each murder and of course the giant monsterama climax. The Crawling Eye comes complete with the expected gratuitous use of Geiger counters and plenty of talk about radio activity. The military is called in for some air-raid bombings and we get plenty of Molotov cocktail-fu. The monsters look amazing and are amongst my all time favorite giant 50's monsters for the way they look alone but unfortunately we don't see them as often as you would think. With a great poster and a totally twisted giant eyeball for a monster you would think they would want to get their money worth and show these things every five seconds. Well this isn't exactly the case and The Crawling Eye does tend to serve as a tolerance test. You wait impatiently for these crazy killers and they come and go pretty quickly but I suppose that is part of the fun with these old black and white monster-mania movies.