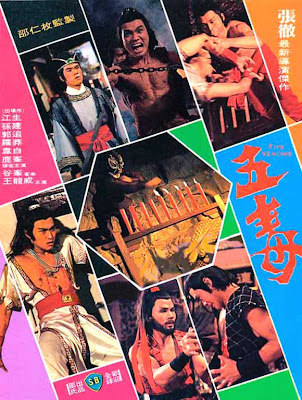 A dying teachers last request is for his newest student to keep five former students, known as the
"Poison Clan" or the Five Deadly Venom's from getting their greedy little kung-fu hands on his "treasure". The only problem is that the new student is no match for these five killers and the teacher doesn't mind letting him know this right from the beginning.

Each of the Five Deadly Venom's specializes in their own special kung fu technique and style. We got The Toad, The Snake, The Centipede, The Scorpion and The Lizard. The Toad has super human strength and can smash steel with his bare fists. The Lizard is very light weighted so he can climb walls and shit. So basically if these guys get together they are a force that is not to be reckoned with. Luckily for the newest student most of these guys have gone their own separate ways but this doesn't mean that they will not rejoin to kick some ass in search of the teachers treasure. 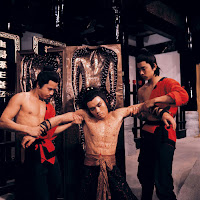 Aside from the amazing opening scene where we witness first hand The Poison Clan in training and smashing bowls, pottery, candles and basically just fucking shit up. The film also offers up a few nasty murders. On guy has a giant needle shoved up his nose and into his brain. Ouch! Another has a hook shoved down his throat which rips apart his insides. Then we have an awesome torture scene which seems like it would fit better into something like Chinese Torture Chamber Story. A man is shoved into a medieval torture device and has thousands of nails stuck through his body. We have a suffocation scene, some ninja throwing stars and of course some crazy flying kicks and wall climbing. This is all put together with really bad dubbing (depending on the version you see) and a cheesy plot that will keep you entertained until the next fight scene.

So if you like crazy kung fu flicks from the 70's with masked villains you might want to check this one out. I'm just glad I now know who the real Human Centipede is.