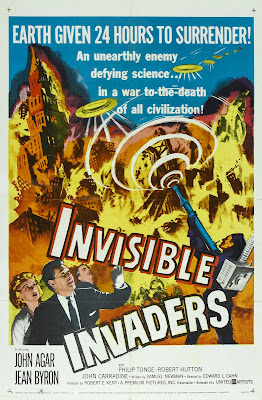 If you crossed The Invisible Man with Night Of The Living Dead and had Ed Wood doing the narration you would end up with something like this. Of course Invisible Invaders came a good ten years before George A. Romero's classic gut munching zombie flick but one can't help but be reminded while watching this 50's monster-rama flick. 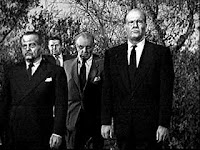 Invisible Invaders comes from exploitation madman Edward L. Cahn the man who directed It! The Terror From Beyond Space, Shake Rattle & Roll, Zombies Of Mora Tau, Dragstrip Girl and over a hundred other crazy titles. It stars John Agar and John Carradine and did I mention there are zombies?

Invisible Aliens come from the moon... Yes thats right, the moon to give the people of Earth a warning. The Earthlings have 24 hours to surrender or they will be annihilated by an invisible enemy. How do you fight an enemy that you can not see? Well the people of Earth being the stubborn morons that they are do not listen to the warning from outer space and within one day all of the nations are on fire and crumbling at the feet of the Invisible Invaders.

I suppose Invisible Invaders would have been a pretty boring movie if we could not see the aliens at all. Lucky for us these creatures from the moon enter dead bodies and roam the Earth. John Carradine shows up as a walking corpse and for this reason alone the movie gains some points on the cool-meter. You know you want to see a zombie version of John Carradine. Early on a zombie Carradine threatens that the people of Earth will be killed by dead men. "The dead will get up and kill" Sound a little familiar? Aside from Mr. Carradine John Agar shows up in a silly little space suit and rides around on the top of a white work van and shoots at the living dead. 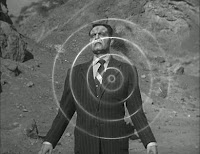 Invisible Invaders also comes complete with some of the dumbest weapons I have seen in a movie since The Blob. We also have gratuitous use of Geiger Counters which always adds to every 50's monster movie. In one scene John Agar shoots a man in the head with a pistol and yes I did say he shoots a man not a zombie but for me this stuff all comes secondary to the stock footage of warfare, burning buildings and natural disaster. This is what really makes Invisible Invaders worth watching. The stock footage is extremely affective and almost helps us look past the overly cheesy Beast Of Yucca Flats type narration.

On a down note the film does tend to slow down a bit towards the end and we are cursed with very obnoxious sounds. The ear piercing sound effects are likely to kill the viewer and or wake the dead but this is a small price to pay for the over all insanity that is Invisible Invaders. A weird little time waster from the 50's. 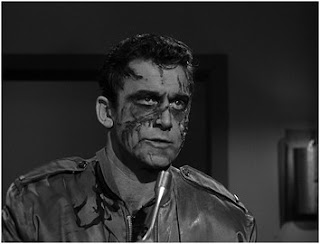