Weekend With The Babysitter (1970) 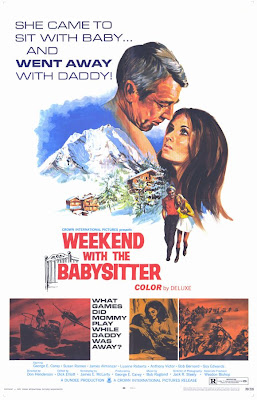 What a disappointment this one was. I recently came across a Sexploitation flick from Crown International called The Babysitter and I loved it. When I learned the director did a follow up in the following year called A Weekend With The Babysitter, I couldn't wait to see it. We have the same director and the same leading man in the Daddy role and although the leading lady has the same name of Candy it is a totally different actress.

Well to make things quick and simple the follow up was a complete mess and to call it a follow up doesn't even seem fair. Weekend With The Babysitter really has nothing to do with the first film other then Daddy is put in the exact situation with a young hippie babysitter. His wife is a bitch and he certainly is not getting any sex. Well that is at least until he meets Candy. 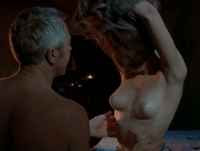 Weekend With The Babysitter does have some nudity here and there but it totally lacks all the sexiness that was in the first film. In fact this movie really doesn't try to be a sexploitation flick at all. Actually I don't know what it is trying to be. It almost seems as if the director was using this film to complain about the demands of the studios. "There is always someone to tell you that there is not enough sex in your movie". This time around Daddy is not a lawyer so we don't have all the cool biker exploits and revenge from the first film. Instead he uses the babysitter to help him have some incite to how young people live so he can make a honest movie. Well who cares how these assholes live and who cares about honesty. This movie fucking sucked and it is a damn shame because the 1969 movie was just awesome.

They throw in some kind of anti junkie sub plot. With a dip-shit for a bad guy who hooks losers on drugs so he can basically verbally abuse them. A man gets thrown from a boat and has the propeller chop him to bits in true I Spit On Your Grave fashion. We also have a lesbian scene and what has to be the worlds lamest biker gang in cinema history. To make things even worse these ass-hats have the balls to talk bad about all the cool Hells Angels movies. "I ride a motorcycle and I don't beat up old ladies" Well maybe if you did beat up some old ladies I wouldn't mind watching the fucking movie. Its amazing how this film feels it is strong enough to knock exploitation movies and then when it is finished it was a nightmare to sit through it.

Skip this movie. For a better time with more sex and more violence and a much better plot just stick with the real Babysitter. That one will get your blood flowing. 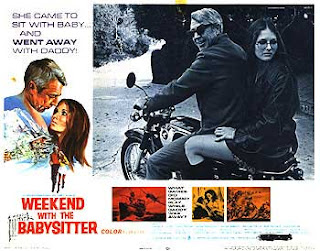 Email ThisBlogThis!Share to TwitterShare to FacebookShare to Pinterest
Labels: Weekend With The Babysitter