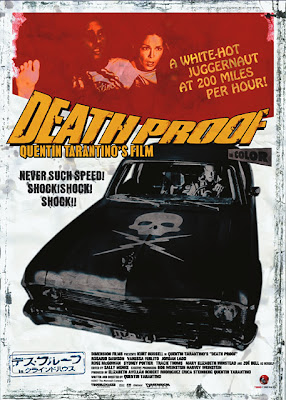 In 2007 Robert Rodriguez and Quentin Tarantino put together a double feature known as Grindhouse. Rodriguez's feature was an 80's style zombie flick called Planet Terror and Tarantino's being a Slasher crossed with a 70's carsploitation flick, known as Death Proof.

Kurt Russel (The Thing, Escape From New York) plays Stunt-Man Mike, a deranged ex stunt-man who now gets his rocks off by stalking hot girls and killing them with his car. "Do I scare you? Is it my scar? No. Its your car."

The car chase scenes are pretty amazing in this movie. Cars flip, motorcycles crash, girls hang from the hood of the car and we have plenty of homage to American car flicks, especially Vanishing Point. Anyone interested in Tarantino's influences for the fast paced car action in Death Proof might want to check out a documentary called Not Quite Hollywood : The Wild Untold Story Of Ozploitation. In this documentary Tarantino discusses Australian car flicks and the influence they had on him.

Death Proof even has a bit of dialogue that mentions Australia when Someone mistakes Zoe Bell's New Zealand accent for an Australian one. Death Proof is full of the normal witty dialogue one would expect from Quentin Tarantino and in one scene the director recreates the memorable diner sequence from Reservoir Dogs with an all female cast.

Death Proof is loaded with homage to classic influential films and actors. In one of my favorite frames Sydney Tamiia Poiter (Daughter of Sidney Poitier) copies Briggite Bardot who is posing in a poster above her. Foot fetishists should find Death Proof to be a bit stimulating to say the least. Every other frame in the movie seems to have a close up of foxy females toes and in the films trashiest moment Kurt Russel licks Rosario Dawson's feet while she sleeps.

Death Proof eventually shifts gears into some what of a revenge flick but before the revenge takes place some of the high notes consist of Rose McGowan (Doom Generation) having her achy-breaky skull smashed in, in a brutal car crash. Another girl has her head sawed in half by a flying tire, legs are severed and sent flying, we have some gun violence, a pipe to the face, a head is stomped into the pavement and a whole lot of damage to really nice cars. We also have an amazing soundtrack which is pretty normal for a Tarantino movie.

I personally like to watch Planet Terror and Death Proof together, the way the gods intended them to be seen but if I had to choose between the two I think I prefer Death Proof over Planet Terror. Death Proof plays more like a true 70's exploitation film despite the use of cellphones and modern female chit-chat. I was lucky enough to catch both films in the theater upon the Grindhouse release. They came complete with all those great fake trailers. The films worked well together in that memory for me. For everyone else who wasn't able to catch the theatrical release, I can't really see how much they would appreciate either one of these movies.

Death Proof was made by a fan-boy, for fan-boys and it is a shame that when the two movies were released for dvd the films were split up with all the added fun missing. For me it almost feels like I am watching a cut down version of the movie and we all know how much it sucks to watch a cut film. I still await the proper dvd release of Grindhouse.