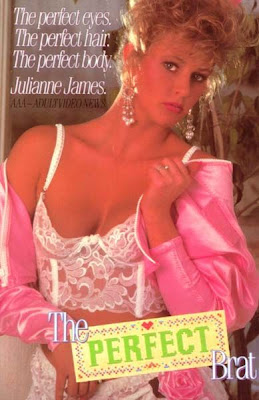 I think The Perfect Brat was nothing more then Tom Byron's attempt to prove to everyone that he is not a 16 year old boy. Tom Byron rocks a mullet and a sweet mustache and an earring. He also tries to act like somewhat of a bad-ass and it is totally ridiculous because the subject is a pretty soft one.

The title really has nothing to do with the movie and if it does I am not sure who the brat is. Maybe it is Tom Byron. Anyway, Byron plays an alcoholic who has been going to new meetings with his girl. They are taught that it is more healthy to fuck then it is to drink but being born and raised in New York, theSTD capital of America, I am not sure how true this is. Well that is really it as far as the paper thin plot goes. Tom Byron gets drunk, Tom Byron gets laid and um well thats just about it.

The Perfect Brat is pretty much a perfect piece of shit and unless you really want to see Tom Byron with a 80's mustache and doing his worst acting job of all time I would say don't waste your time. I guess its still better then the fuck-tapes that people watch these days but who is to say? After all, shit is in the eye of the beholder.
Posted by Paul Awful at 6:29 PM