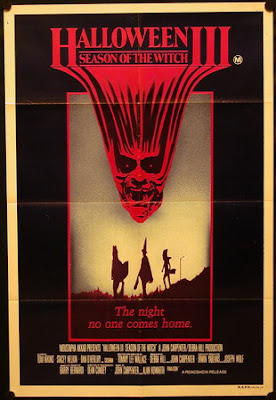 Most people really do not like this movie. Those who out right hate will always say "Halloween 3 sucks. Michael Myers isn't even in it". Then you get the ones that kind of like it who say "It shouldn't be called Halloween but it works okay as a stand alone movie". I'm really bored with both of these statements and the truth is I think I like the movie even more because it angers Halloween fanatics.

I like the original Halloween as much as the next guy but Halloween III : Season Of The Witch is good campy fun and if it wasn't called Halloween I think it would have been a bigger hit.

I think this was a simple case of a marketing scheme gone wrong. As if someone said, hey Halloween and its sequel were such huge hits the name alone will sell the movie. This probably worked initially but I think it really hurt the film upon its video release. Halloween series or not I like the movie and always will and for all those who say it sucks because Michael Myers is not in it they are wrong on both levels. Season Of The Witch is cool and Michael Myers is in it. There is a scene where Halloween is playing on t.v. and there you go. There is your fucking Michael Myers. Now you have to come up with a new argument!

A Pagan cult plans on killing the children of America on Halloween night as a sacrifice to the stars. Conar Cochran, the leader of the cult hides up in a factory where they mass produce Halloween masks and ship them out all over the world. These are not just any Halloween mask they are made with pieces of rock from Stone Henge and electronics and of course something evil. The masks are electronically on a frequency with a trendy television program for children that will take place Halloween night. All of the trendy American kids want a mask so they can watch their Halloween show in style. That is of course until their heads explode and worms, snakes and gross looking bugs will pour from their split open skulls.

Is it believable? Not so much but it sure is a fun watch. Season Of The Witch is pretty gruesome at times. We have multiple decapitations, a woman's face is split in half, two fingers are shoved into a mans eyeballs and his face is ripped apart, we have robots that spill greenish/yellow Phantasm style blood, a man is burned alive in a suicide scene, car explosions, bad early 80's computer graphics and a very memorable song that is played through out the film. The great Tom Atkins (Night Of The Creeps, The Fog) plays the hero and John Carpenter regular Nancy Kyes also shows up as a bitchy, nagging wife.

For me Season Of The Witch is a classic horror flick and a great choice for younger kids to pull off the shelf at Halloween time. For a kid this movie is pretty damn creepy and as an adult you have to appreciate it for its camp value. For a good time with exploding children's heads check this one out that is if you can get past the fact that it is part of the Halloween series.