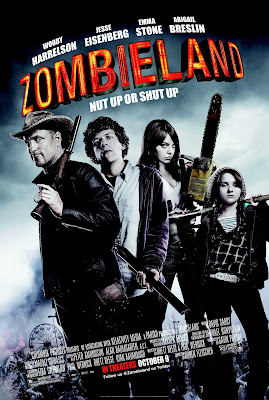 As usual when it comes to big budget Hollywood horror flicks that everyone loves it takes me forever to get around to see it and most of the time I want my hour and a half back once I finally do get around to it. Zombieland is one of those rare exceptions where I actually did enjoy the movie and now regret not seeing it four years earlier upon it theatrical release. 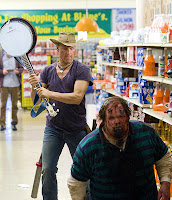 When Suan Of The Dead came out in 2004 it was a big hit amongst the new generation of horror-hounds. Many fans of the classics liked it a lot too. I thought it was a mediocre horror/comedy and didn't really understand the hype around it. Personally I feel Zombieland is a much more entertaining movie. Its more funny, more gory and overall just the better movie. Of course the massive and pointless use of computer graphics was its biggest down fault but this is something that is just unavoidable in the confused state of so called film making in the computerized 2000's.

The thing that makes Zombieland work so well is the fact that it is narrated. Our dorky main character has survived the zombie apocalypse which is amazing because he is afraid of everything from girls to public toilets and especially clowns. It is this super-nerds fears that have kept him alive all this time and right from the beginning he shares his technique with us through narration which is all done pretty comically.

Woody Harelson shows up as a zombie killing, Twinkie loving, Bill Murray fanatic. Woody makes killing zombies look like art. He uses a different weapon for just about every kill and he enjoys every minute of it. Emma Stone plays the leading lady and she is pretty nice to look at. Unfortunately Zombieland doesn't offer up any bare breasted action but we can only hope they will improve upon this in the sequel. Come on Emma Stone! Woody does get the chance to meet his hero and we are treated to the life and death of a zombified Bill Murray which was just fucking genius. Bill Murray takes Zombieland to a different level of ridiculousness and his performance is humorous to say the least. "I saw David Lee Roth the other day... Hes a zombie now". 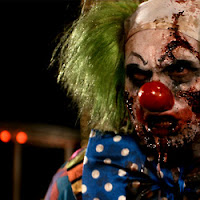 Zombieland blends comedy and gore quite well. It offers up survival pointers such as "The double tap" which is an important rule to survive the zombie invasion. Don't ever assume your zombie is dead. Shoot em in the head again. We have plenty of these pointers throughout the movie and we also have the recurring talk about "Zombie kill of the week". The first time this subject comes up it takes place in a flashback where we see a senior citizen, grey haired, church woman kill a zombie with a falling piano booby trap.

Never during this movie do we ever feel like a main character might die. For this reason Zombieland is not a horror movie. It is clearly a comedy and for all those young zombie fanatics out there who like the Dawn Of The Dead remake and those stupid Resident Evil movies maybe Zombieland scares them but thats not surprising. I am just glad that somebody finally made a zombie comedy that isn't a total piece of shit. Of course Zombieland doesn't compete with a real zombie comedy like Return Of The Living Dead or even ultra low budgets from the past like Redneck Zombies but for a movie made in the modern age of shit cinema, you could do a lot worse.

I think I will catch the theatrical release of Zombielands follow up. "Fuck this clown"