Not Quite Hollywood : The Wild Untold Story Of Ozploitation (2008) 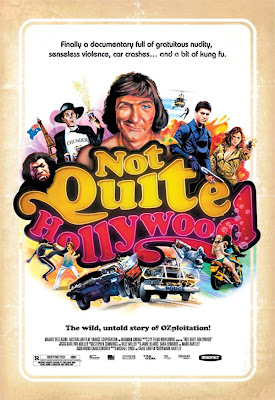 Watching this documentary on Australian exploitation cinema made me realize two things. The first being that maybe I haven't seen entirely to many movies because almost every title they speak of in this movie I have never seen and most of them I haven't even heard of. The second realization is that I am bound to see a lot more because this movie is fucking insane and makes Australian cinema in general look fucking nuts.

The film starts with the sleazy sexploitation films and makes its way into the horror genre and then into biker film territory and the car crashing mayhem of Ausy on the road films. Quentin Tarantino appears a lot in this film and speaks of Australia's influence on him. He admits to borrowing from many of these movies, one in particular being a scene from Patrick (one of the few films in the documentary I have heard of) which he would use in Kill Bill.

We get lots of bloodletting, car explosions, and action film violence which is displayed on he screen in quick clips from various different movies. Each looking more bad-ass then the last. Australians are crazy people who break bones, set themselves on fire and even die for their form of cinema and I think this is something that I am going to be forced to study a bit more.
Posted by Paul Awful at 10:08 PM

Email ThisBlogThis!Share to TwitterShare to FacebookShare to Pinterest
Labels: Documentary, Not Quite Hollywood : The Wild Untold Story Of Ozploitation, Ozploitation