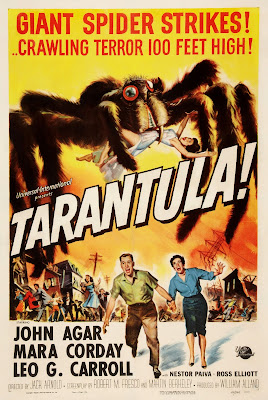 When it comes to 50's horror and sci-fi flicks Jack Arnold's name is one of the first that comes to mind. The director is responsible for such classics as Creature From The Black Lagoon and The Incredible Shrinking Man. He would release this giant spider flick the same year as Revenge Of The Creature. Needless to say the director was very busy at this time. 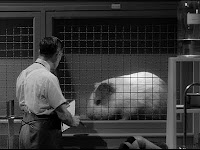 We have a deranged scientist experimenting with a new serum on animals which results in mass growth. Of course he originally had good intentions with a goal to help feed an over populated world but naturally he sinks into the depraved depths that all of these scientists sink to in these movies and continues with his experiments even after it has been the death of his companion and best friend. In the early part of the movie we get to see giant guinea pigs, giant rats and of course an abnormally sized Tarantula but we also have some human mutations and while not in size (after all this is not The Amazing Colossal Man), when people are injected they look a little more like something from Jack Arnold's other film Monster On The Campus.

When the scientists lab catches fire most of the over sized wild life is killed and burnt to a crisp. That is with the exception of the Tarantula. The giant spider makes its way out of the front door and heads out to the desert mountains. Its not long before the Tarantula is on its murderous rampage, taking out horses and other farm land treats. Naturally the spider becomes to big to ever walk through another doorway. Instead it knocks houses down and causes avalanches in the mountains.

50's monsterama cult icon John Agar (Revenge Of The Creature, The Mole People) is the first to catch wind that there might be a "giant insect" roaming about in the desert and he is the first to try to blow the thing up.

John Agar gets the not so willing police to help him track the thing down. Armed with "sub machine guns" we are treated to the death of two cops who meet their fate in a sexy 50's car that conveniently doesn't start. Its not long before the whole town joins in on the war against the giant bug. They try to take the thing out with a bunch of dynamite but this doesn't faze something that walks through and knocks over electric towers and telephone lines. Nope... This looks like a job for the army, or the air force for that matter. We get a pretty fun climax with missiles and even napalm... Nice!

Tarantula is a bit slow going at times and a bit to talky but it all speeds up eventually and offers up one hell of a climax. Check this creepy-crawling classic out for fun with giant venomous spiders. Oh and the sex appeal comes from a girl named Steve!?!?