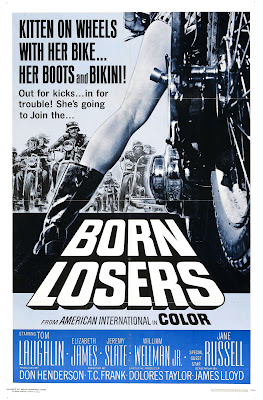 The mid 60's was the height of Biker Exploitation Films and Born Losers is amongst the best of the lot. After the success of Roger Corman's Wild Angels in 66 a whole slue of these rough-rider movies would follow.

Directed and staring Tom (Billy Jack) Laughlin as the do-gooder Indian who takes revenge against a gang of violent bikers who call themselves the Born Losers.

This is the first time Laughlin would ever play Billy Jack and Born Losers is the best of the lot. The story is strong and so is the suspense and action. Born Losers almost plays like a western with many showdown type scenes between our vengeful Indian in the cowboy hat and the losers that he goes to war with.

About five minutes into the film we are treated to some violence when the Losers kick the shit out of a smart mouth college kid in a traffic jam. They beat the kid to a bloody pulp and everyone turns the blind eye. That is except for Billy Jack. Billy grabs his riffle and shoots one of the bike riding scumbags down. The gang is locked up and so is Billy Jack. The only problem is that Billy's sentence is much worse. "Think twice next time before you help someone". Once Billy Jack is released from jail the Losers decide to make his life a living hell. They fuck with him where ever he goes, they rob his house and steal his money but he doesn't decide to battle these bastards again until they rape a lone-rider babe in a white bikini on a motorcycle played by Elizabeth James (Dirty Mary Crazy Larry).

The bikini clad biker-babe is just one of the many rape victims of the gang. The same day they rape three teenie-boppers and it makes the news. When two of the Losers are identified and caught by the police the rest of the gang terrorize the rape victims and their family.

Well enough is enough! Billy Jack has some ass to kick and it all comes together in a big showdown at the gangs clubhouse. With tire irons swinging and guns-a-blazin.

This one offers up a mute with no tongue who screams in women's faces, a dirty son of a bitch named Crabs "What do ya say we all jump in a shower together", A vice president named Child Of Christ and a bunch of other memorable characters. Achy-breaky skulls are clobbered with tire irons, motorcylces burn. We get gun violence, knife violence, a strip-tease from an "over sexed teenager". Although we do get a little bit of bare flesh this thing could have only benefited from some more nudity but hey I couldn't ask for much more from a movie rated {PG}. If this thing was released today it would clearly be rated {R}.  Still Born Losers is amongst my favorite of all biker films. Its Death Wish meets Satan's Sadists. Oh and watch for the scene between Billy Jack and Elizabeth James in the resturaunt. We get some good continuity where Elizabeth starts to say her lines and stops. Then she picks it up again. 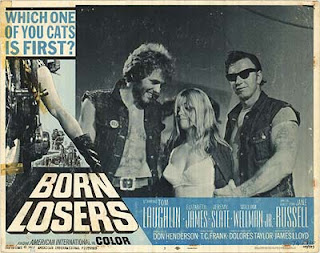