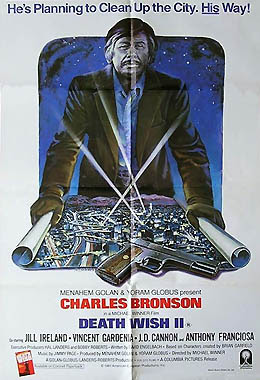 It took eight years for the first sequel to Death Wish to come but it came at us with guns blazin and still stays true to the original. Perhaps if they took their time on the sequels to follow they would have been as interesting as this follow up to the classic rape/revenge tale.

Yet again Bronson proves that it never pays to be close to him. His daughter is raped yet again by another gang of vicious punks but this time she doesn't make it out alive. After the violent rape scene she tries to make her escape but ends up impaled on a metal, spiked pole from a fence in a scene that looks like it should have been in a horror movie. For those who remember correctly in the first Death Wish Bronson's daughter was not the only victim of sexual abuse. His wife was also attacked and killed by the scum bags. I guess the film makers decided that if there was two rapes in the first film there had to be at least two rapes in the sequel. The second rape victim in Death Wish 2 is Bronson's maid. The scum take turns with her and then smash her achy-breaky skull in. Naturally there is vengeance to pay.

Charles Bronson takes to the Hollywood streets. Oh yeah this one takes place in California since the police forced him out of New York City in the first film. He searches every sleaze-ball corner for the degenerates who killed his friend and daughter but what he finds instead is criminals in every parking garage, bus and arcade but the main difference between the sequel and the original is this time around he actually finds the low lives that harmed his family. He finds a few rapping a woman and he shoots them to shit. He takes out a few more in a big shoot out scene when he catches them purchasing automatic weapons.

He drops a cheesy line in one scene when he asks one of the punks "Do you believe in Jesus? You're gonna meet him" the he shoots him full of holes and takes back to the streets for more revenge.

In my favorite scene, the only remaining gang member beats the shit out of half the police force while high on P.C.P. after his arrest he is sent to a rehabilitation hospital. Bronson poses as a doctor and sneaks into the hospital for a final fight scene where Charlie gets stabbed full of holes.

Laurence Fishburne (Apocalypse Now, King Of New York) shows up as one of the rapists. He meets his fate with a bullet to the face. Fishburne walks around with a ghetto blaster and does some silly dances but he sure does have some cool sun glasses. We also get a death by electrocution, some knife violence, dead cops and a really sneaky Charles Bronson. It all makes for a great follow up.