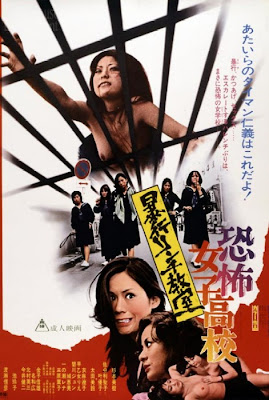 This is a very strange Pinku film. Its basically a women in prison movie with a school for delinquents instead of an actual prison. It is extremely violent and holds no punches however it suffers a bit in the plot department.

From the director who gave us the amazing Pinku sleaze-fest Girl Boss Guerrilla we get more of the expected female delinquents on motorcycles but this one plays a less like a Yakuza film then it does a horror movie. There are definitely elements from the American Roughies with gratuitous nudity and of course torture. The story tells of three new delinquents who will be attending the "School Of Hope" where the punishment consists of horrible torture and even murder.

Luckily for us actress Miki Sugimoto from violent epics such as Zero Woman : Red Handcuffs, Criminal Woman : Killing Melody, Girl Boss Guerrilla and many more plays our lead delinquent Noriko and is on yet another path of vengeance. When Noriko learns that a fellow gang member was tortured to death in The School For Hope she swears to kill the group of fascist bitches who were responsible. We are treated to plenty of naked Japanese women and of course all the violent stuff that is expected from a Pinku Violence film. In one of the most disturbing scenes a girl has a red hot light buld shoved up her vagina and is forced to do push ups. Another one offers some humiliation and public urination in the same vain as Last House On The Left which came out one year earlier and I'm sure influenced this Japanese flick. We also have a political statement going on about the corruption of Japanese politicians and mainly the police. I find it amazing that one of the most disciplined countries is able to release such rebellious art. In the films climax we get a revolution lead by the high school girls. They take over the school, run amok and go to war with the police.

Terrifying Girls High School suffers a bit with the numerous subplots. We have a greedy reporter trying to blackmail the school board and politicians. This really doesn't add any depth to the film. In fact it hurts it in a way and takes away from what is really going on. Still it is a fun watch and well worth the buy for anyone who is into this brand of trashy Japanese cinema.