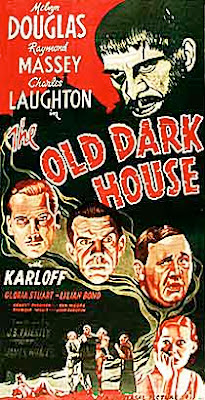 Another masterpiece from James Whale. This one blends horror and comedy perfectly. Its almost impossible to decipher which genre the film leans more towards. 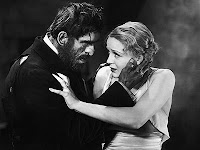 This film would be released one year after Whale's classic Frankenstein and would once again star Boris Karloff as a monster. However this time around he wasn't compiled from parts of different corpses. Instead he is a drunken mongoloid. When he gets to drinkin violence is bound to break out. Considering his brute strength this is pretty scary. However Boris Karloff isn't the only danger in the house.

When five people are caught in a horrible storm which comes complete with flooding and a mountain top avalanche, they are forced to seek shelter in The Old Dark House. They are not exactly welcomed but they are greeted in to warm up by the fire and get something to eat. While mongoloid Boris Karloff "Tips the bottle" in the kitchen a deaf woman throws mean comments around at our guests "your pretty clothes will rot and so will your pretty flesh" and her brother who most would remember as Dr. Pretorious in Bride Of Frankenstein doesn't hide his feelings of fear and contempt for the old dark house. He is also an atheist who mocks god during dinner. You gotta love how James Whale manages to throw in his anti religious views into 1930's cinema.

The stranded guests start to believe that the house is cursed when they find an old decaying man who is locked in a room towards the top of the house. The old man warns them of the dangers within the house and tells them to beware of Saul, a madman who lives in the house. Well Saul does in fact exist and he chases the guests around with knives and sets fire to the house.

Some how this morbid tale is filled with jokes and comedic characters. The comedy is never over the top and it is done just right. Its sure to get a chuckle out of you.

In the following year James Whale would continue his routine of horror with a sense of humor with The Invisible Man but unlike his Universal monster flicks The Old Dark House is still somewhat of an unseen movie. I think it is one of those movies that film makers love and even more love to pay homage to but unfortunately as far as the general public goes this movie doesn't get the notoriety that it deserves.