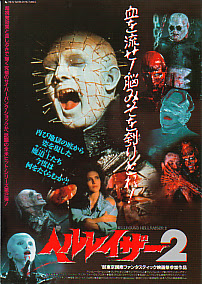 Hellraiser was an interesting movie. It was completely original for its time and it was very unique in subject matter and visuals. Nothing before was ever quite like it. Unfortunately we can not say the same about the shit-loads of sequels that it spawned.

Hellraiser 2 starts off with a bang. It takes off where the first film left off and Ashley Laurence is inside an insane asylum. Insane this place is... We have lunatics screaming and yelling, a man who's flesh is severely mutilated because he thinks maggots are crawling on him, weirdo's who roam about and of course a mute little girl who likes to solve puzzles. The hospital scenes are very creepy and hold true to the bizarre vibe of the first film. We also get an extremely disturbing scene where our maggot-man slashes into himself with a straight razor until he is almost skinned alive. This scene is pretty fucking gross and gore-hounds we be delighted. 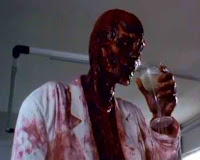 From here on the movie goes down hill plot-wise. Sure if you are completely numb in the head you can still enjoy all the bloodletting but the whole thing doesn't make any sense. That has always been my problem with supernatural movies. They have an excuse to make an incoherent film. Things can happen without reasoning and it tends to get on my nerves. Still the rivers of red stuff makes it all some what watchable. Another big problem with this sequel is the fact that it runs a bit to long. The uncut version clocks in at 99 minutes and since it doesn't make any sense it makes it even more of a painful sit. I think the main problem here is that Hellbound was not directed by writer/director Clive Barker. I think he had a better vision of his own story in the first Hellraiser.

The rest of the Hellraiser movies are not even worthy of a watch so I suppose that says something about this one. Still I recommend sticking with the first film unless if you can substitute substance for blood. In that case Hellbound comes complete with a recap of all the gory moments from Hellraiser including the "Jesus wept" exploding daddy scene. We are also treated to more skinless mayhem, a man who juggles his own eyeballs, lots of maggots, a heart is ripped from a mans chest, faces are diced up, open brain surgery which reminds me of Happy Birthday To Me and we get a very strange vision of what hell might look like. This is all done with cheesy 80's special effects.

Not a very good movie but the beginning is a lot of fun.