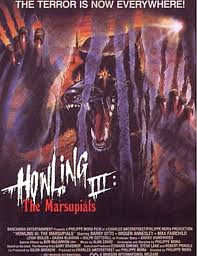 Oh The Marsupials. This Australian sequel to the classic werewolf epic The Howling really takes the series in a new direction or maybe no direction for that matter. Scenes from The Howling III can be seen in Not Quite Hollywood : The Wild Untold Story Of Ozploitation a documentary that shows the history of Australian exploitation cinema and how strange and far out the movies really were. 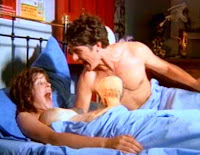 The Howling III is no exception to the rule. It is wacky as hell. The truth is I probably would hate this movie if it didn't hold a teenage charm for me. I first saw this thing on Joe Bob Briggs Monstervision. It was cheesy back then for me but Joe Bob has a way of making any movie more watchable.

The fact that this thing comes from Australia and sports Marsupial werewolves is enough camp value to make the movie interesting to say the least. Throw in some really awful actors, an incoherent and disjointed plot, some really bad special effects and a cheesy movie within the movie and you get a pretty memorable flick... kinda!

They say nuns run in packs... or is that wolves... Either way we get a group of werewolf nuns. A giant wolfman explodes by close range rocket launcher, we get the crazy 80's latex face bubbles in a transformation scene and a weirdo Alfred Hitchcock wanna be character. In one of the movies best moments we get a werewolf skeleton who rips a man to shreds. Why a werewolf skeleton? Why Marsupial-Werewolves for that matter? Don't ask why. Just sit back and enjoy this nonsensical mess for what it is.

The director is responsible for other Ozploitive delights such as The Beast Within, Mad Dog Morgan, and he was also to blame for The Howling II : Stirba - Werewolf Bitch. With the exception of the Sybil Danning gratuitous titty shots I think I prefer the Marsupials sequel.

Its a weird one! 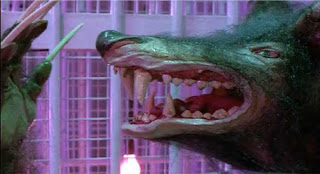