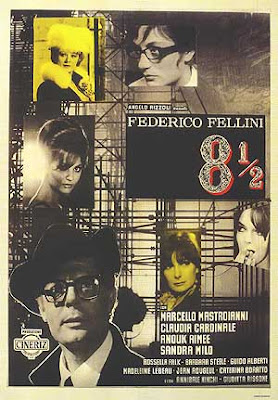 I'm going to have to watch about eight and a half trash films just to make up for this pretentious sit. 8 1/2 runs around two hours long which isn't necessarily a big problem if there is a lot going on but this one is typical of a Federico Fellini film in the sense that the visuals are nice but when it is all said and done there is very little that is memorable about the film. 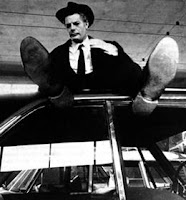 La Bella Confusione was the original working title but yet again in a self indulgent act Fellini changes the title to 8 1/2 which was the number of films he directed to date. The film is as pretentious and self indulgent as the title. It plays somewhat like an autobiography for the highly praised art director.

The plot follows a director named Guido, who is getting ready to shoot his next film. Everyone is counting on him and smothering him for a little bit of information about the film. The actors, producers and camera men are all kept in the dark. The reason being... There is no film. So basically Fellini decided to make a movie about nothing. The director is surrounded by so called friends, business partners and the women he loves and betrays but he couldn't feel more confused. A large amount of the film is told through flash backs of his childhood oppressors and especially the women in his life. Still nothing makes it down on paper for the film.

Beautiful Gothic babe Barbara Steele who caught the worlds eye in Mario Bava's Black Sunday shows up as one of the many women in Guido's life. Barbara Steele always adds a few points to any film even if she is old and beaten and wheelchair bound in Caged Heat. Well she is young and lively in this one and as usual is nice to look at. Steele is just one of the many beautiful women in this movie. In one of the better scenes Guido goes into a fantasy day dream where he is surrounded by all the women he has known. They serve him and cater to his every need. I found this scene exceptionally humorous because it truly is every mans dream come true and Fellini is the only director I have ever known to capture this.

The other highlights of the film show a dancing sailor, a self afflicting gunshot to the head suicide scene, and an amazing opening sequence which shows a man stuck in a car jam. He kicks out his window and climbs to the roof of his car and he floats above all the cars in the traffic jam. He flies over the city and above the water at the beach. He has a rope tied to his foot and someone is holding the other end as if he were a kite. Then he falls down into the watter. The shot is to amazing for words. It has to be seen. How Fellini pulled it off in 1963 I'm not quite sure but it sure does make for eye candy. Now if there was somewhat more of an interesting plot and not long half hour intervals where nothing happens I might be a bigger fan of the film over all.

Email ThisBlogThis!Share to TwitterShare to FacebookShare to Pinterest
Labels: 8 1/2, Arthouse, Eight And A Half, Fedrico Fellini's 8 1/2, Fellini 8 1/2, La Bella Confusione