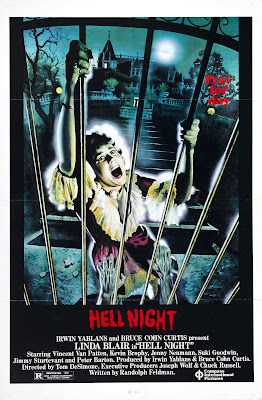 This early 80's slasher uses the oh so familiar (House On Haunted Hill) plot. With a group of people who make a bet to stay in an old abandoned mansion until sun up. Naturally people start dying.

This time around its a group of four sorority pledges who dare to stick the night out in the old house. Just like House On Haunted Hill the old mansion has a violent history of murder. The former family was executed by the man of the house. He strangled his wife, smashed his oldest sons brains in with a fire poker, impaled his daughter with the same poker and then hung himself. Unfortunately he forgot to kill his oldest son who of course witnessed all the mayhem. It is believed by some that the oldest mongoloid son still lurks the hidden tunnels and dark corridors of the old house. Again just like House On Haunted Hill the house is full of booby traps and practical jokes to scare the new pledges. Hologram ghosts appear, hidden speakers let out blood curdling screams and senior sorority members run around with silly masks on.

Despite all the corny gags the legend turns out to be true and a mongoloid monster-boy starts killing off the college kids. The best murder shows a machete to the throat (complete with decapitation) in a scene that reminded me of 3 On A Meathook. We also have strangulation, some shotgun violence, people impaled on pointy fences, death by sickle, necks are snapped and twisted completely around in true Exorcist fashion and speaking of The Exorcist, Linda Blair plays the main character here. Her acting is not exactly what I would call good in this one but then again were any of her 80's movies acted out all that well? Hmmm remember Grotesque?

The director was responsible for a bunch of cult flicks. His first flick Terror In The Jungle is a personal favorite of mine but he would also go on to do such trashy delights as Reform School Girls and Chatterbox!

Hell Night is your basic 80's slasher with nothing all that exciting to offer. Its still a good time passer as are most of these stalk and slash flicks. The monster looks a bit like Lon Chaney in Phantom Of The Opera which is kinda cool I guess.

The three things that could have helped this movie move along a bit better would have been a bigger body count, more gore and bloody mayhem and of course some female naked flesh. We do get a guy who runs around in little shorts and says "radical" every five seconds. So maybe that's something for all the ladies who are stuck in the 80's. Other then that we get some girl who looks a bit like Nancy Allen (Dressed To Kill and Carrie) who walks around in lingerie but that's about it for the female sex appeal. The best way to watch this one is with some friends and some beer. Not to be taken very seriously! 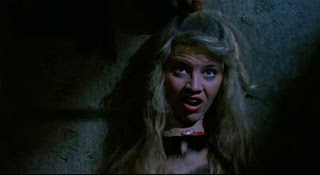