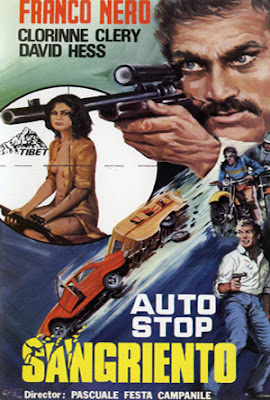 Italian cult icon Franco (Keoma) Nero is on the road with his wife Eve when they stop to pick up a Hitch-Hiker played by Hess. Picking this bastard up was the biggest mistake of the married couples life. They are held hostage at gun point by the criminal/killer hitch-hiker.

Hitch-Hike is a pretty miserable movie. Franco Nero and his wife are far from happy even before they pick up the hitch-hiker. The film opens with a shot through the scope on Franco Nero's riffle. He zero's in on his wife and holds the cross hairs directly between her eyes. Nero decides to shoot a deer instead of Eve. They spend most of their time arguing and fighting and Nero likes to rape his wife at least once or twice a day.

Things get worse when the king of rape joins the couple across country. Of course David Hess does what he does best and adds some more rape-happy hi jinx to the mix.

Nero is forced to watch his wife being ravaged by another man but he doesn't seem to care much about Eve's feelings instead it seems that his manhood and "Latin pride is hurt" and to make things even more twisted it almost seems as if Eve might like the abuse a bit but it is never clearly stated. "My wife is what you call a bit of a whore".

David Hess and Franco Nero are great together. We get a pretty cool fight scene between the two actors and Hess claims in an interview that Nero really broke his nose in that fight.

Its awesome to watch Franco Nero doing a fight scene in a cast because his hand was broken on his previous film Keoma, a Spaghetti Western classic where Nero apparently busted his hand from punching his horse!?!? Ya gotta love a man who openly admits to punching his horse so hard that he breaks his hand. 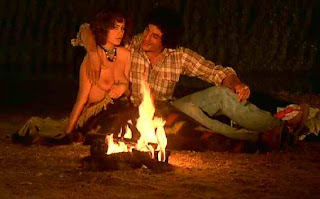