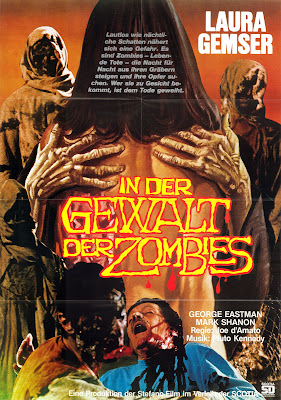 Still somehow the movie seems to contain to much filler, with repetitive shots of the victims running in circles on the island.

The Black Emanuell, Laura Gemser shows up here as one of the only survivors on "Cat Island". Surrounding islands believe that Cat Island is inhabited by zombies led by a black cat. Well this turns out to be true and the film sort of suggests that Laura Gemser might be the black cat. Gemser offers up tits, ass and fluffy bush. She has a beautifully shot sex scene with George Eastman and a slightly more trashy lesbian scene with a fellow nympho.

The climax completely rips off Lucio Fulci's Zombi with the old mummified looking corpses being set a blaze.

Some added treats that this one has to offer is visible genital warts. A very trashy scene where a girl sticks a wine bottle where the sun don't shine and pops the cork inside. Now that's talent! A zombie has his face blown off by a riffle. We get head explosions, decapitation, a hook through the head, lots of maggots and a man with a giant bubble on his head. 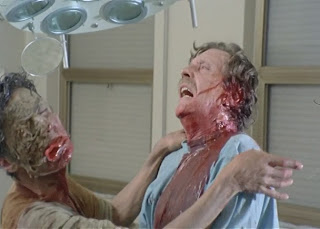