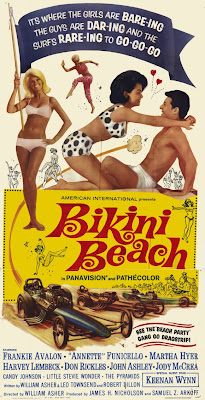 Bikini Beach trails along after Beach Party and would be released the same year as Muscle Beach Party. These Beach Party Flicks are all pretty wacky and tend to be all over the place.

Frankie and Annette have several obstacles in their way. First off we have a British rock & roll sensation named Potato Bug who is clearly a mockery of The Beatles. Potato Bug is played by Frankie Avalon but you wouldn't notice at first. With the gap in his teeth and the 60's garage-rock style mop top swaggy and shaggy haircut. Potato Bug distracts Annette from pretty boy Frankie for a while and it isn't all holding hands, singing and night walks on the beach. Of course all of that expected nonsense is there but luckily for us its a bit limited. Then we have an old timer who is trying to ban the teenagers from the beach. He drags them through the mud in the news paper claiming they are sex crazed delinquents. If only this were true Beach Party Movies might be more entertaining and not the lowest denominator on the exploitation scale.

We get plenty of Go-Go dancing scenes and a couple of catchy songs. Mainly the title song Bikini Beach but there is also a ridiculous little ditty called Secret Weapon and of course little Stevie Wonder shows up for some blind rockin & rollin.

We also have a man in a monkey suit running around and making the teenage youth look bad. The monkey can out-surf, out-dance and even beat them in drag races. This of course having something to say about the mental capacity of the teenage beach bums. The retarded biker gang The Rats tries to bring Frankie and his pack down again and we get a big fight scene for a climax which is probably the most entertaining scene in the whole movie.

I personally have never been the biggest fan of the beach flicks. Partially due to how silly they are but mainly because they are just to soft. The beauty of exploitation movies is that they push the envelope. They can be more sexy, more violent and more graphic then a major studio production which has to much to loose. These childish comedies really do not offer that and bikini clad babes only go so far. Still I punish myself and watch this mind numbing crap in a daze of confusion and bewilder. If these movies don't offer anything else at least we can dig the music.

This one also sports a Boris Karloff cameo and oddly enough the director would go on to do the awesome 80's slasher Night Warning. Now that you should see. 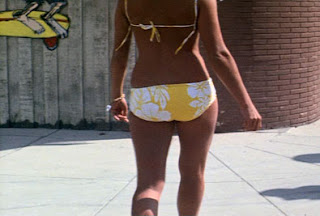