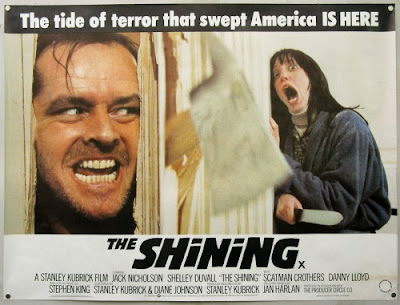 When it comes to mainstream horror movies, they really don't get much better then this axe swinging classic. 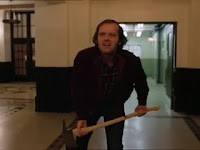 The cast is perfect. Jack Nicholson acts his heart out as the axe wielding psychopathic family man. Shelly Duvall is perfect as the annoying wife and even the child actor is great. Scatman Crothers shows up as the psychic with the heart of gold. Scatman can brighten up any movie, even one as grim and scary as The Shining.

Of course the acting performance was brought to its height from master director Stanley Kubrick. Kubrick makes The Shining the memorable classic that it is with beautiful angles and sexy camera work. Every shot is framed to perfection and if you broke The Shining down into still photos I'm sure that every single frame would make for a nice picture in your home. 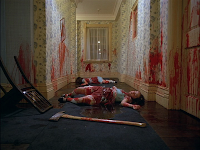 The Shining has been analyzed and many times even over analyzed bore boring self rightous sophisto-cats. I am not about to go down that bumpy road but what I will say is that this film remains one of the creepiest ever made and it doesn't matter how many times you go back and look at it. It still manages to scare the socks off ya. From the heart pounding chase scenes to the eerie images that pour onto the screen like the corridors of blood (not to be mistaken for the Boris Karloff flick) or infamous furry blow job scene. I remember when I was a kid seeing this movie for the first time I jumped right from my seat at that moment.

It still amazes me to this day that Stephen King despises this film because it is clearly the best adaption from any of his novels that has ever hit the screen. Sure I understand that it isn't true to the writers book but who cares... Its still a cinematic masterpiece. Then in 1997 some asshole had the audacity to remake the film which played much more like the book reads. Naturally it is an awful fucking disgrace but of course Mr. King liked it. I don't know if I can listen to mans opinion on movies when they claim the best horror movie ever made to be Toolbox Murders. (Which was also remade and completely destroyed.

We even get a bit of tit and bush in a steamy bath tub scene. Well lets just say it starts off steamy because things definitely cool down quick with the next image to follow. We are treated to a naked senior citizen woman covered in mold and decaying on the screen. Its a pretty nasty sight. Yuck!

For those who grew up under a rock and have not scene The Shining my first suggestion would be to have your head fixed. Jack Nicholson plays Jack Torrance a writer who took on the obligation of looking over The Over Look Hotel for the winter. The hotel has a very violent past with a former caretaker who chopped his family to bits with an axe and then blew his own brains out with a gun.

Since the hotel is fucking enormous we follow Jack Torrance in and out of bizarre rooms where some not so nice things have happened. We also follow him into his decent of madness and mad he is. In fact he is crazier than bat-shit and its not long before Mr. Torrance is chasing his own wife and kid around the Over Look with an axe of his own.

The Shining manages to hold some what of a touch of comedy to it as well. It is not overbearing. Just the right touch to relieve tension from the insanity that we surround ourselves with for 146 minutes.

The Shining is one of the best. So don't chop your kids up with an axe tonight. Instead take em to see this immortal classic.

Email ThisBlogThis!Share to TwitterShare to FacebookShare to Pinterest
Labels: Hauntings And Ghosts, Shining (The)