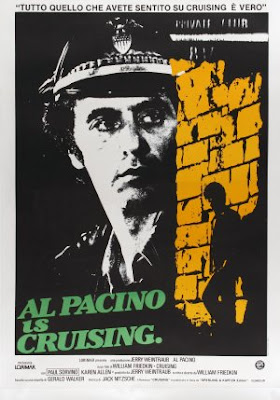 1980 was one of the best years for movies made in New York City. So many edgy cult films would emerge from the big apple in this year. Cruising is one of those movies and its cult status is more then deserved. It is Al Pacino's most daring role and in my opinion Cruising is the best movie he has ever done. Scarface would come out three years later and while the budget may have gone up the guts have not. 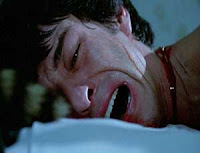 Cruising is filled to the brim with other cult icons from the time. Joe Spinell who gore hounds would remember best as the psychopath who scalps hookers in the 1980 slasher Maniac shows up as a perverted corrupt cop who likes to take in gay hustlers and show them his night stick. Spinell's partner is played by Mike Star who has 185 titles to his name to date. This was his first feature but he would go on to do big shitty Hollywood stuff like Dumb & Dumber but you could also enjoy him in The Last Dragon. Karen (The Wanderers) Allen plays Pacino's girlfriend and we also get Michael Beck who played Swan in The Warriors and many more. I also could have sworn I saw Abel Ferrara in here too although I may be wrong because he is not credited. With a cultified cast like that how can you go wrong. Oh and did I mention it was written and directed by William (The Exorcist) Firedkin???

Cruising plays a lot like George C. Scott's Hardcore mixed with elements of a slasher film. Its dark, gritty and mean but it sure does hold the attention. We get one very humorous scene which I'm sure was influenced by Hardcore where a big black man wearing nothing but boots, a cowboy hat and a jockstrap smacks Al Pacino around. This movie will make the average straight male stay home where it is nice and safe. It definitely gets into the mind and doesn't leave for a while. Check it out for bundles of fags in leather jackets and a psycho killer on the loose with a fetish for gay flesh. It also sports legendary punk band The Germs on the soundtrack which is also very cool.

Oh and don't forget to wear a rubber. This ones dirty!