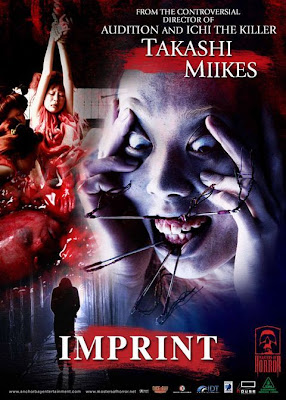 Back in 2006 there was a pretty awful series of horror films being screened on Showtime television. The series was called Masters Of Horror and the idea was for all the biggest horror directors to do a one hour movie where anything goes. There was supposed to be no worries from the censorship board and the film makers were supposed to have 100% artistic control over their movie. Since television totally fucking sucks this was obviously not the case.

Amongst the dozens of shitty Masters Of Horror short films only two stood out. The first being Dario Argento's Pelts and the second being Imprint.

Japanese renegade, Takashi Miike was the director behind Imprint and to make a long story short, it never saw the time of day on the t.v. series. The losers back peddled on everything they said and immediately denied a screening of Imprint due to the violence, nudity and extremely morbid nature of the film. Luckily for us Takashi Miike fans, the film was saved and released by Anchor Bay on dvd. It truly is a nasty picture.

The subject matter alone is enough to turn a few stomachs. Throw in the gruesome torture scenes and wham! a classic is born. Imprint is told through a series of flashbacks that depict a horrifying life of a disfigured prostitute. We witness abortion in nasty detail. The dead fetus's float past the camera in a river that they are dumped in to. Then we are treated to incestuous rape scenes and a pedophile Buddhist priest. A child kills her alcoholic father with a rock to the achy-breaky skull. Then we get the infamous torture scenes that shows a prostitute bound with rope and burned. She has needles shoved underneath her fingernails in a extremely disgusting scene that is sure to make the most jaded of gore-hounds cringe. Metal wires are also shoved between the gums and teeth of the poor woman and she is eventually murdered. Imprint also offers up death by gun shot, strangulation and even a mutant Siamese twin.