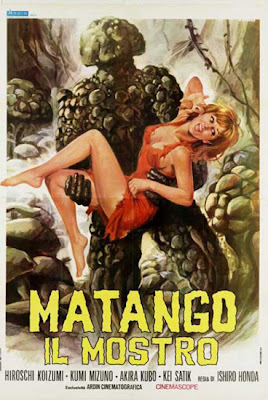 This 1960's Japanese monster flick comes from the director who gave us the original Godzilla. The man was also responsible for a shit-ton of Godzilla sequels including King King Vs. Godzilla, Mothra Vs. Godzilla and many more. Not to mention Rodan and Destroy All Monsters. So you know this one has got to be good.

The truth is this one starts off a bit slow with seven yuppie, losers on a private yacht enjoying a nice cruise and singing really shitty songs that would remind you of something you would see in one of those 60's beach movies. Things start to get interesting when these rich bastards are T-boned by a relentless storm that leaves their ship destroyed. They have no choice but to hit land and seek shelter. Well they find shelter in an abandoned pirate ship but there is little to no food on the island with the exception of mushrooms... Giant mushrooms at that. The high society crew goes the longest they can by eating grass roots and other delicacies of the land but eventually some of them give into their starvation and take a chance with the fungus which is among us. Fortunately for us our group of seven starts decreasing in numbers when they start turning against each other and that's not all they are turning into... Those who feast their hungry stomachs on the seemingly endless supply of mushrooms start to transform into mushroom people, hence the title. This thing is also known as Curse Of The Mushroom People, Fungus Of Terror and a few others.

There is some talk of radiation and warfare thrown into the mix but Matango almost seems to have some other metaphoric meaning which is never clearly spelled out or at least I couldn't decipher what it all means. Naturally being an American cultured loser I have ventured into the psychedelic depths of mushroom hallucinogens and this is undoubtedly happening withing this 60's film as well. Who says the Japs were not part of the hip generation? These cats enter their own state of euphoria through the cursed mushrooms. Where I come from we call that a trip and a trip we go on when we venture into a world of mushroom people.

Naturally we get the mushroom monsters that we are promised but this movie holds some other charm beneath the surface that can't really be pin pointed. Some of the other treats that this one has in store is a bikini clad Japanese babe, some gun violence and the cross between survival instinct and greed. A sort of early version of Cabin Fever if you will. Check it out for fun with fungus and starvation but don't try to make any sense out of the final scene. Its just fucking weird!