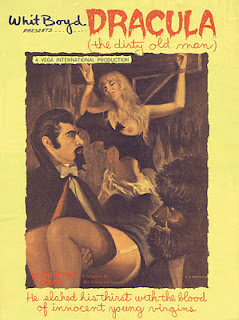 Find a Dracula movie that is weirder then this one, I dare you! It amazes me how dumb people really are. If you have the patients to read anything anybody has ever said about this movie on IMDB.Com you would know what I mean. Apparently people have a hard time realizing that this movie is supposed to be funny. 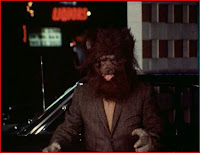 Dracula (The Dirty Old Man) is exploitation at its best. When the final cut was finished and test screened the film makers must have buried their heads in their hands knowing that they have failed. Sure people might see it at the local drive inn but they most certainly are not going to like it. What to do? Flush the audio track down the fucking toilet and redub the film. Mock it the whole way through and make the people laugh. Woody Allen was very successful three years earlier with Whats Up Tiger Lilly and I'm sure that's where the producers grabbed their inspiration from and subconsciously they might have even thrown a little more proof that Woody was the inspiration because the narrator gives Dracula a thick Jewish accent. 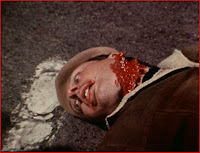 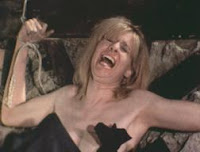 We also get a bit of gore as if this movie wasn't weird enough. We really needed a vampire, werewolf, sexploitation, comedy filled with gore didn't we?

The truth is that this movie is still a pretty rough sit even with the comedic audio track. Sure it has some very funny moments but it still drags along at a very evil pace.

For a better time with redubed horror flicks check out Revenge Of The Sun Demon. That one is funny as hell. The Hideous Sun Demon was a stand up monster flick on its own so you can't go wrong with that one. Still Dracula (Dirty Old Man) does hold a certain charm for all you demento's out there who collect totally bizarre novelty flicks. Its worth seeing at least once for its strangeness if nothing else. 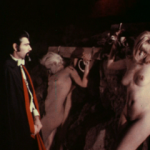