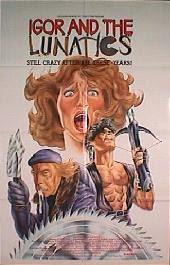 I recently went back and took a look at this childhood favorite of mine. It was just as bad as I remembered it... In a good way.

This thing starts off in the late 60's and the story is told from the point of view of Tom, an ex cult member of a Charles Manson like hippie group. The Manson character is named Paul and why they didn't call him Charlie is beyond me. The cult believes Paul to be a messenger from god. Sound familiar? Paul is preparing his followers for what he calls "the new way" and from what I can see, the new way consists of doing drugs, having sex and praying. Of course some of the family members turn their back on Paul and that leaves him with no alternative other then to chop them up on giant table saws.

The infamous table saw scene takes place in the very beginning of the movie and then is shown two other times in more detail. I guess they really got their moneys worth with that effect. The saw splits a topless woman in half from crotch to forehead and is clearly the most memorable scene in the movie. Paul's most deranged and loyal follower is Igor who is shown on the VHS cover art. Its a shame that the guy who plays Igor has only done this one film because he is a pretty nutty dude and really entertaining to watch. He's always yelling and making ridiculous faces. Igor uses an abnormally large switchblade as a weapon of choice and we are lucky enough to watch him gut a bare breasted babe in the back of his hippie van. 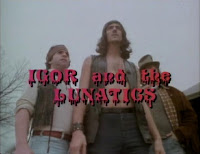 While Igor And The Lunatics starts off on a pretty strong note it quickly becomes discombobulated and none if it makes much sense. Even the characters names change. Igor suddenly becomes Paul Byron which is really confusing because the cult leaders name is Paul.

The film eventually jumps forward to the 80's and the real Paul is released from prison. He pulls a (Terry Hawkins) Last House On Dead End Street move and takes revenge against the town that locked him away. Tom goes to war with Paul and Igor... or what ever his name is and we get a couple gore scenes. 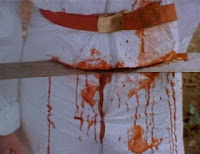 Igor And The Lunatics comes complete with giant switchblade's, a machete to the torso, meat cleaver to the achy-breaky skull (complete with red splatter), really ridiculous acting, naked ladies and a hilarious police raid where hippies get the beating of their lives.

Personally being a fan of all these Charles Manson type films I have to admit this one is amongst the worst. Still if you free your mind and keep repeating its only a movie... Its only a movie and take this cheese-fest for what it is, you might even enjoy it. For a much better and more coherent time with Manson like hippie cults and murder you should just stick with I Drink Your Blood. Oh yeah and this thing comes complete with a typically dumb 1980's jump-scare ending. 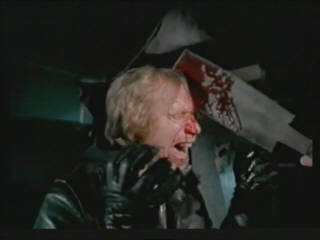 Email ThisBlogThis!Share to TwitterShare to FacebookShare to Pinterest
Labels: Igore And The Lunatics