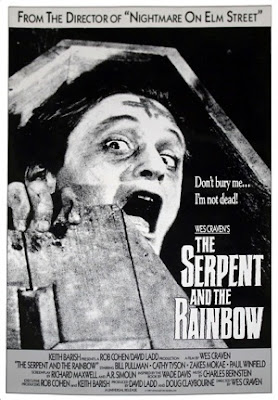 Wes Craven, where did you go wrong? By the time this movie came out it was already to late for writer/director Wes Craven. The good ole days of rape revenge and mongoloid cannibals in the mountains were a thing of the past. Now we are in the dreams and nightmares obsessed times for Mr. Craven where logic can be thrown out the window.

A Nightmare On Elm Street was creepy and original enough for the teenage horror hound version of myself but to many of Cravens films dabble in  supernatural events and or dream state nonsense from this point on.

Even when the director attempted to go back to making movies that made sense all he had to offer was Scream. Thanks a lot but you could keep it Wes.

This movie actually has a very unique plot and really could have been a good movie. Bill Pullman plays a scientist who comes to Haiti when he learns that voodoo priests are using a drug to create zombies. He wants to bring the drug back to America where they can possibly use it as an anesthetic in the medical field. Well lets just say its more magic then an actual drug and Pullman becomes the walking dead himself when he betrays a fascist dictator who also has his hands in voodoo. Yes you guessed it... The dictator controls our zombie in his dreams and things happen without any explanation, rhyme or reason. For instance someone can burst into flames and disappear in mid air but then come back and curse their enemy? What the shit!

The movie does have a couple of things in its favor. It offers up some penis violence (complte with nails driven into groinal area), a crazy hallucinogen drug that makes people do the unthinkable, some naked female flesh which may not be the most attractive scene in cinematic history but at least it is there. Last but certainly not least we get a decapitation which is pretty cool. The gore scenes make The Serpent And The Rainbow somewhat watchable but the movie is still a big hack-job and deserves more criticism the praise. 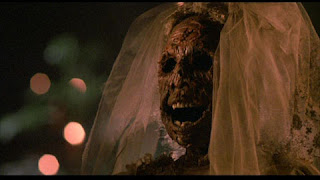 Email ThisBlogThis!Share to TwitterShare to FacebookShare to Pinterest
Labels: Serpent And The Rainbow, Voodoo, Zombie Flicks