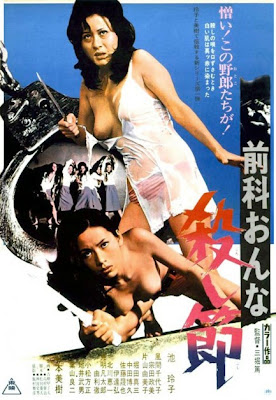 This Pinku Violence movie plays somewhere between a Women In Prison movie and a classic revenge tale in exploitation. Maki is our lead bad-ass female, who is imprisoned for slashing the face of a Yakuza member who is part of the clan that was responsible for her fathers death.

The prison scenes are very reminiscent of the Scorpion : Female Prisoner movies with gratuitous fight scenes and of course the tearing of clothing to show off some naked flesh which is expected from the genre with movies like The Big Doll House and Caged Heat. The unforgettable knife fight scene between Maki and a rival prisoner has to be seen to be believed. The two women hold a rope in their teeth and slash at each other with a broken shard of glass. The object being that if the opponent screams and the rope falls from her teeth she is of course the loser. This scene runs really long at what seems close to ten minutes but is well worth the time.

Between bare breasted cat-fights Maki shares stories with the other delinquent prisoners and we get a bit of back story on each. Maki also plans on finishing what she started and acting out her vengeance against the Yakuza clan that killed her father. She plots out an elaborate plan of attack to destroy the gangsters. The plan is to kill one important gangster and make it look like an assassination which will start an inner conflict and they will kill themselves off. Then the pickings will be slim and Maki can take the boss and the big men out on her own. Now that's a cool fucking plot!

Maki teams up with three fellow delinquent girls from the neighborhood to help her on her path of revenge. We do get our share of nudity but personally I feel we could have had more. The most blatant sexual scene is a bondage S&M scene that reminds me of a cross between De Palma's Scareface and Girl Boss Guerrilla. Maki is stripped nude and bound with rope. She is beaten for information but when she doesn't speak even when a ruthless Yakuza member gets a bit chainsaw happy. Might I point out that this film came out one year before the classic Texas Chainsaw Massacre.

A must see for exploitation fans and lovers of female fatal's!