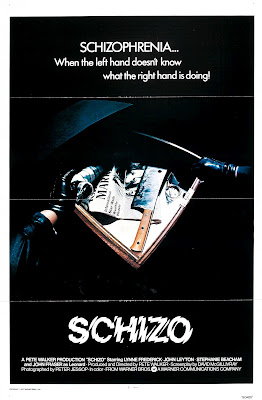 Not to be mistaken for Nightmare In A Damaged Brain or the shit-ton of other movies that went under the brilliant exploitation title of Schizo. Nope, this one comes from British director Peter Walker. Walker is my favorite of all English directors mainly because his brand of horror was a bit more nasty then the Hammer Studios type stuff that was coming out of England at the time.

Responsible fro such trashy delights as Frightmare and House Of Whipchord, Peter Walker offers up another violent piece of horror. Its funny because Schizo plays more like an Italian Giallo with a black gloved psychopath on the lose. It has plot twists, a surprise ending and a bit of mystery going on. It is clearly different then the British horror that was going on at the time. I'm sure Mr. Walker was influenced by the work of Dario Argento or Mario Bava when he dished this slasher flick out.

This one starts off a little slow with cheep gags and cheesy scares but it makes up for it with some bare breasted women here and there. For those of you familiar with Peter Walkers The Flesh And Blood Show which I feel should have just been titled The Flesh Show due to the lack of blood, I can assure you that this one does not follow in the same footsteps. It gets more violent as the time runs on and before long throats are being slashed, achy-breaky skulls are smashed in with repeated blows from a metal mallet. Bodies are run over and mangled, sharp objects are shoved through eyeballs, faces are slashed, bodies are impaled and naked women are stabbed and hacked to shit. There is also a cool scene where a psychic is possessed and goes Bat-shit which reminded me a bit of Deep Red.

Check it out for schizo's and various sharp objects being put to good use. 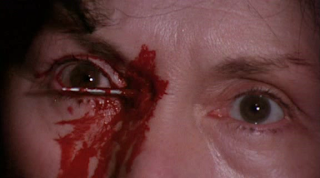