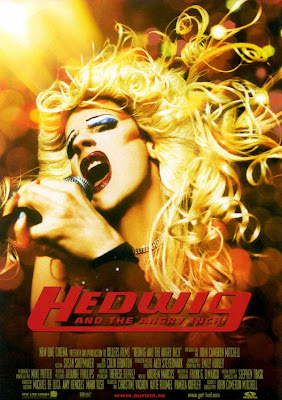 The Rocky Horror Picture Show is of course the most famous transsexual, musical of all time. It is one of the worlds biggest cult films and one of the most successful of all midnight movies from the 70's. I however prefer this strange little title from the 2000's.

Hedwig is a punk rock transvestite from Germany who tells his story through song of how he lost his manhood on his way to America. Growing up Hedwig idolized the likes of David Bowie, Lou Reed and Iggy Pop (which is funny because the actor looks a bit like Iggy). The young German rocker dreams of being an American star. When Hedwig meets a gay, black soldier he decides to get a sex change and marry the American soldier. "The operation gets botched" and Hedwig "is left with a one inch mound of flesh" between his legs. Hence the title The Angry Inch. Hedwig is neither man nor woman and he doesn't mind making a spectacle of himself on stage. Fans of the great Jayne County are sure to love this movie. Sure the music is a bit cheesy with the exception of the song "I got an angry inch" but the bizarre nature of the movie is enough for weirdos like myself to enjoy it.

We also have a sub plot going on about an ex lover of Hedwig who stole all his greatest songs and took all the credit for them. Hedwig's rival ex lover is played by Michael Pitt (Bully) and the viewer can't help but want to beat the shit out of this Hollywood pretty-boy.

Things go from bad to worse as Hedwig struggles along in the music industry and tries to find himself at the same time until he finds a way to feel comfortable in his own skin. This film will go down as a cult classic for lovers of glam rock and punk rock alike. Check it out for some fun with penis chopping and men in makeup.

Email ThisBlogThis!Share to TwitterShare to FacebookShare to Pinterest
Labels: Hedwig And The Angry Inch, Musicals