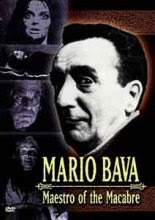 This hour long, made for television, documentary discusses Mario Bava and the impact he had on cinema. In Bava's 65 years on this earth he shot 72 films and directed 37 and almost everyone was influential in one way or another.

The documentary starts off with Bava's childhood and goes on to show how he was pretty much born into the world of movie making. It gets really interesting once they discuss Caltiki (1959) a monster film that Bava although uncredited directed the majority of the film.

Of course one year later Bava would release his groundbreaking Black Sunday. Directors such as Joe Dante (The Howling, Piranha) and Tim Burton (Mars Attacks) go on to explain how Black Sunday was somewhat of a cult classic from birth and they speak of the personal impact that the imagery had on them.

Samuel Z. Arkoff and Roger Corman were also very big fans of the movie and wanted Bava to come to America for a A.I.P. project but luckily for us Bava fans the directer denied the offer and continued his craft in his home country. However Bava did give Arkoff some distribution rights for the American audience and Black Sabbath is what he had to offer. The Amercian directors go on to explain how Bava was never really appreciated in America until his death but directors loved him. John Carpenter (Halloween, They Live), Burton, Sean S. Cunningham (Friday The 13th) would drive for hours to catch a Bava film in a drive-in.

The one thing that really surprised me is how Blood And Black Lace doesn't get any discussion. I found this pretty odd considering it is the second Giallo from the director who is responsible for creating the genre. On the other hand the movie goes into a brief history of the origins of the Italian Giallo and of course Bava's first entry in the category is spoken of (The Evil Eye).

The Whip And The Body with Christopher Lee shows up, Twitch Of The Death Nerve and Baron Blood are all touched upon but not Blood And Black Lace. They also spend quite a bit of time speaking about how badly American filmmakers have ripped him off over the years. The blatant plagiarism in Friday The 13th from Bay Of Blood or Alien from Planet Of The Vampires but apparently Bava never cared of felt any animosity. Everyone who knew him including his son Lamberto Bava (Demons, Macabre) claim that Bava never considered himself an artist and never even took himself seriously. He made movies for fun therefor he never cared if he made money or became famous. I'm sure the man would be pleased to know that people finally recognize him for the genius that he was. Bava's films are immortalized thanks to video and this documentary is a good watch for fans of Italian horror and Mario Bava. 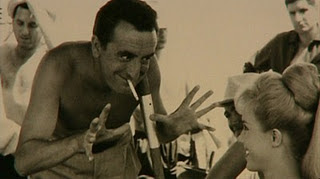 Email ThisBlogThis!Share to TwitterShare to FacebookShare to Pinterest
Labels: Documentary, Mario Bava : Maestro Of The Macabre