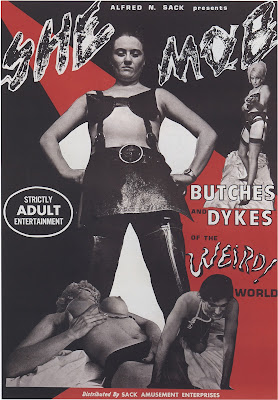 Tony is a male gigolo who has some pretty rich clientele. His number one customer is a rich bitch who buys him cars and anything else he wants as long as he is willing to wake up from a hang over to her awful cackling and still preform the ole in-out, in-out on her in the marble bathtub. She isn't much to look at and this is just a taste of things to come because most of the women in this movie are pretty damn ugly. Still they bare it all and leave behind a legacy of filth and debauchery in the world of Sexploitation films. Tony the gigolo gets a call from an old friend, Big Shim. Tony is needed to turn a trick on a group of young women who have not seen a man in a long time. Little does Tony know that it is all a set up and he is in for a world of shit.

Big Shim is the leader of an all girl gang. She comes complete with a spiked leather bra and leather chaps. When I said spiked I meant it. This leather bra can pierce through flesh and kill a man. "I have some killer tits". Big Shim is about as ugly as can be. This bull dyke has a captive lesbo sex-toy names Baby and now Tony the Gigolo is the new prisoner in Big Shim's house of psychotic women. Upon Tony's arrival he is greeted by the naked bitches of the house, all of whom Big Shim just broke out of jail. Needless to say these sluts are ready to treat Tony like the piece of meat that he is but Big Shim has bigger plans for him. She ties him to the bed and writes a ransom note for ten thousand dollars to Tony's rich-bitch girlfriend. "Unless you want to see your boyfriend looking more like a choir boy" send your money. Next we get a bunch of gratuitous nudity and random sexcapades which are all dished out in bad taste. One of the criminal babes goes by the name of Twig. She has a voice that could break a chalk board and she enjoys go-go dancing, topless of course. Then we have a couple of average looking blonds and a brunette who wears some pretty cool 50's style sun glasses and fishnet stockings. 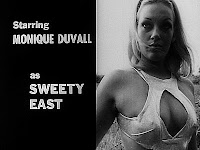 Tony's rich-bitch girlfriend can't afford to lose Tony to gang of ruthless bull dykes so she calls on a female private dick named Sweety East who is clearly the best looking babe in the whole movie. She looks like she stepped out of something like Russ Myers Faster Pussy Cat. Kill! Kill! and she drives a fast sports car and knows kung fu to boot. It is up to this titular detective vixen to save Tony from the grips of the evil Big Shim and her clan of killer lesbians. Sweety East has this shiny get up that shows off her finer aspects. It is exceptionally low cut in the back and her ass crack and cleavage is a blazzin the whole time. I would assume the outfit is gold but this 60's Roughie is shot in glorious black and white as is expected and very much necessary.

Tony takes quite a beating while he is being held captive. Baby gets shot in the face with a shotgun (complete with black and white gore) and Big Shim does impale someone with her "killer tits". We get female masturbation scenes, Gratuitous sex, car chases (complete with crash and burn explosions), ridiculous 60's kung fu, bondage scenes, whipping scenes with more blood and perhaps the most bizarre cigarette holder I have ever seen. It is a electronic mule. You press a button and a cigarette pops out of the mules ass. Where can I find one of these things? I can not live without it.

Luckily for me I don't have to live without She Mob. Something Weird Video delivers this thing on a double feature disc with Nymphs Anonymous and is a must own for the average depraved mongoloid who finds pleasure in this form of cinematic smut. A brilliant piece of trash! 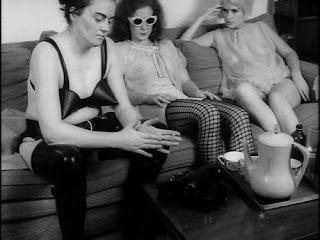 Email ThisBlogThis!Share to TwitterShare to FacebookShare to Pinterest
Labels: Roughies, Sexploitation, She Mob