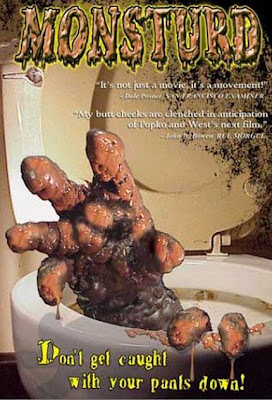 Do you like shitty movies? If so, this one might be for you. This is the biggest piece of shit I have ever seen. Its filled to the brim with toilet humor and the monster or should I say Monsturd is a giant killer bowel movement. Awesome! 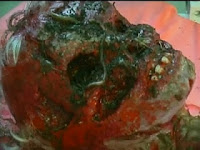 Usually I hate just about everything that is shot on video. Especially if it is shot in the 2000's but every once and a while I come across something that sparks my demented attention. I first rented this movie upon its release in 2003 and the guy behind the counter warned me that this is "a crappy movie" I thought that was funny and I ended up laughing through the whole damn thing.

A mad scientist who works for "Duetech" comes up with a new deadly bacteria and releases it into the California sewage system. Mean while a serial killer named Jack Schmidt (see the toilet humor) escapes from prison and hides in the sewers. He falls into the waste that our mad scientist has concocted and he melts down to the bone. Naturally Jack Schmidt's d.n.a. mixes with the foul bacterial and we get a giant killer doo doo, a number 2 if you will. 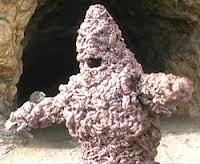 The killer piece of shit terrorizes a small California town. Comes up from the toilet and catches you "with your pants down". The police send an emergency warning for people to stay away from their toilets but this is easier said then done because the annual chili cook off is coming up "and we all know that where there is chili, there are toilets".

I love that Monsturd chose to take the classic nature gone wrong angle with a big event coming up that the town relies on, similar to movies like Piranha and Grizzly. Of course they threw in a little Texas Chainsaw Massacre part 2 for added spice with the chili cook off. The truth is that Monsturd is filled with all kinds of horror cliches and homage to bigger and better things. We have a character named Johnny Waters which can be taken two ways. Of course the infamous cult trash film director or just simply toilet water. Brilliant! This movie also pays homage to Blood Feast in a much appretiated scene and we just get plenty of ridiculous moments all of which were done with a 8 year olds sense of humor. In other words it was perfect for me.

In one of my favorite scenes we watch a cop beat the shit out of a hippie puppet that he is supposed to use for a classroom full of kids to persuade them not to use drugs. The cop smashes the hippies head in with a knight stick while letting out a strand of curse words. "You low-life, dope smoking, hippie, scumbag, piece of shit". That scene makes me laugh every time. Then there is the fact that the cops are all pretty much retarded. They wear diapers on their heads, knees and elbows as armor and arm themselves with pepto bismol, toilet paper and flies because we all know that flies like to eat shit. Sounds like files to a Shit-Man is like krypton's to Superman.

The makers of Monsturd would also go on to do a similar spoof type horror flick called Retardead, which I have not seen to date but I think its about time to give that one a go. If it is half as funny as Monsturd it can't be all that bad.

Monsturd is way better then the majority of these brain-dead spoof horror flicks. If you like this thing you might want to check out Yakov Levi's short film The Killer Bra which is just as amateurish but shares the same level of bad taste. 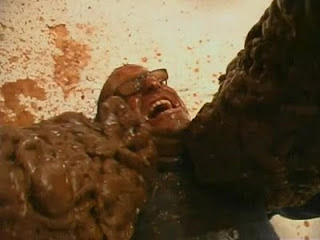