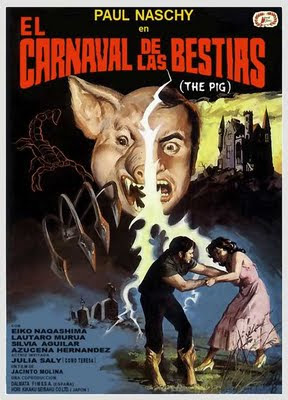 Written, directed and staring the great barrel chest who goes by the name of Paul Nashy. Nashy really blends the genres in this twisted tale of murder and betrayal.

Human Beasts also known as The Beasts Carnival and Cannibal Killers - Human Beast blends elements of an Italian style crime film, a gialo, a haunted house movie and an American style cannibalistic family like Texas Chainsaw Massacre or The Hills Have Eyes and in case if this isn't enough for you we are also treated to some killer pigs but we will get back to that later.

Paul Nashy plays Bruno, a backstabbing criminal who betrays his Asian girlfriend and partners during a heist. Once Bruno has the gems that he was after he shoots his partners full of holes and leaves his girlfriend stranded with the dead bodies on the side of the road.

Well we all know that the Japanese folk do not like to be dishonored so Nashy's girl swears vengeance upon him and fills him full of bullet holes to return the favor. With the help of some hand grenades Nashy makes his escape and seeks refuge in an old mansion where he is brought back to health by the man of the house and his two daughters. Right off the bat we know that something ain't right with this family. One of the daughters is a total slut-whore-nympho who likes to ride Nashy's unconscious, bullet filled body. The father likes to whip his black maid and the house seems to be haunted by a ghost of the late lady of the house. Of course Nashy sticks around and also takes turns sticking the daughters. We all know that the ladies just can't resist Paul Nashy and his infamous barrel-chest...

Soon the movie will shift gears again into slasher territory and we have a gialo type killer running around with black gloves and knocking people off one by one. In the best scene we witness a pervy man with a John Waters mustache being eaten alive by pigs. This scene is fucking awesome and makes the whole movie worth its time. Another victim catches a hook through the eye and we get slit throats and stabbings to boot. This is now the third Paul Nashy Gialo type movie I have seen to date. Panic Beats and Blue Eyes For A Broken Doll are the other two. I'm not sure exactly how many of these Italian influenced murder mysteries he has done but the three I have seen are all pretty cool for their own reasons and unlike the more popular Nashy monster-rama stuff Nashy doesn't necessarily have to win in the end.

Human Beasts comes complete with some artsy-fartsy and creepy dream sequences, naked female flesh, a bit of gore and cannibalism. Nashy fans will not be disappointed. 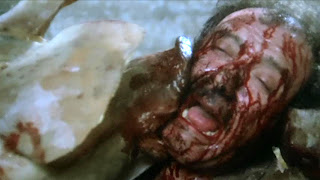