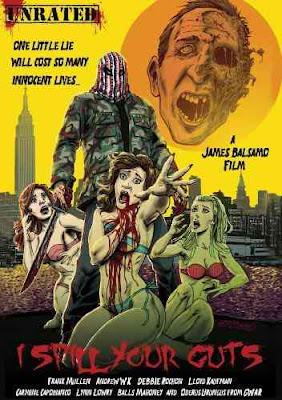 Long Island writer, producer, director James Balsamo comes at us with his second feature film. For those familiar with the over the top cheese-o-rama Hack Job, you would have a pretty good idea what is in store for you here. I Spill Your Guts brings back a lot of the same cast members from Hack Job and it is still jam packed with bare breasted bimbos and plenty of loud bands.

For me the main difference between Balsamo's first film and I Spill Your Guts is the fact that this movie tells a much more coherent story. It follows Joe Bava a war veteran played by Billy Walsh who's claims himself a war hero after he left his friend Dennis (James Balsamo) for dead in the desert. Dennis took a bullet in the neck for Mr. Bava and somehow recovers from his deathbed and kills all of the doctors in the hospital. Dennis continues his blood-bath across Long Island and New York City until he comes face to face with Joe Bava in a final showdown in a junk yard.
Knowing James Balsamo and most of the cast personally it is a bit hard to pass proper judgement on the final product. You find yourself laughing more at your friends cheesy lines, bad acting or naked bodies. One thing I can say on a positive note is that there was some decent kill scenes and the naked females look much better this time around. I Spill Your Guts is also slightly more serious then Hack Job (I suppose) and that is always a plus.

On the down side the audio levels on my dvd were completely out of whack with blaring metal that can cause some serious ear damage and head trauma followed by scenes of dialogue which is almost impossible to here. Then there was all these seemingly filler scenes that shows NYC buildings with really shitty dance music playing and we all know that while metal is pretty lame in its self that dance music is just out right torture. We did get a couple of cool murder scenes including an impressive shot that shows a vehicle being dropped on a helpless victim which comes complete with spilled guts but some of the kills seemed to have been cut while others were to dark to see.

I feel that I Spill Your Guts was a step forward for James Balsamo and crew but unless your friends with these guys it is really only worth a look if you are into late 80's shot on video gore flicks or the campy style of modern Troma Studios movies. 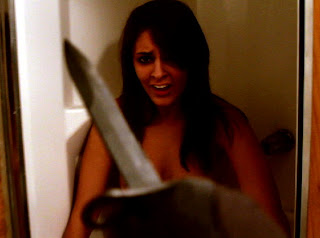