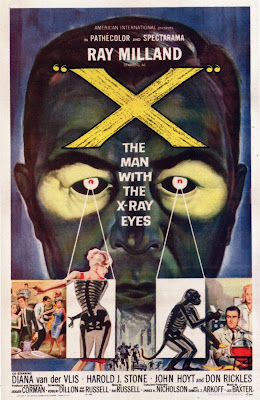 In 1963 Roger Corman would produce seven films. Amongst those films are Dementia 13, The Terror and of course X : The Man With The X-Ray Eyes. While Roger Corman's direction skill might not be quite up there with Francis Ford Coppola's Dementia 13, I would still say that X has more replay value to it, if not for any other reason, its campy elements.

X was sort of a new take on the 1930's classic The Invisible Man but instead of Claude Rains as a power-mad invisible maniac we get Ray Milland (The Thing With Two Heads, Frogs) as Doctor Xavier. Dr. Xavier is messing around with a new drug that comes in the form of eye drops. When administered the drugs affect allows the subject to see through objects. The sole purpose for the new drug is to help surgeons diagnose patients and of effectively perform surgery with little to no mistakes. If a doctor can see through a patients flesh how can he ever miss the mark? Well things don't go exactly as Dr. Xavier planned and the drug brings the doctor into a world of horror rather then fortune and fame.

At first the drug seems to be a whole mess of fun. Dr. X enjoys the sites of naked women, sees things going on behind closed doors and is also very successful in the medical field. When another doctor doubts Dr. X and his ability to see through the human body Dr. X cuts him with a scalpel. Shocked by his own actions Dr. X takes off running and accidentally kills a man. Nobody is going to believe Dr. Xavier so his best bet now is to lay low for a while. The doctor takes up a job at a circus where he pretends he is a mind reader. With the help of his drug he sees through peoples pockets, clothing and is able to tell them things about themselves that nobody could possibly know. The great Dick Miller shows up as a class-clown type. Miller mocks Dr. Xavier and calls him a fake and things don't end to nicely for Mr. Dick Miller.

Like The Invisible Man, it was easy for the doctor/scientist to get himself into the mess but there is no way out. He is cursed by his x-ray eyes which is no longer fun but more like a curse. He has to sleep with his sun glasses on and his now blackened eyes are so sensitive that everything around him hurts. It all ends in a downer climax that will leave the doctor with no eyes at all. We are treated to a cool police chase that comes complete with crash and burn vehicles, we get some crazy religious type stuff thrown into the mix and a really cool scene in a casino where the man with x-ray eyes cheats everyone around him.

X is good clean campy fun and I say clean because this unrated 60's flick is very {PG}. It could have been slightly better if they upped the sleaze factor a bit. Maybe some bare breasted women would have been nice. I guess doctor X is a very selfish man and doesn't want to share what he sees with the rest of us. Still despite the lack of sex and violence I still dig this one. Its well worth a watch for sci-fi horror fans and the ending is classic.

Email ThisBlogThis!Share to TwitterShare to FacebookShare to Pinterest
Labels: X, X : The Man With X-Ray Eyes