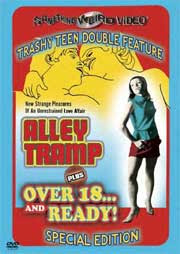 What we have here is the worst example of a Roughie that I have seen in a very long time. It is the oh so familiar exploitation story of a young girl who wants to make it in the acting business and gets sucked into the smut picture racket. You know the rest, the only way this girl is going to make it to the top is from laying on her back.

For starters Over 18... And Ready casts an overly ugly crew. The main nudie here is not exactly horrible in the face but she has a body like a water buffalo and perhaps the worst posture I have seen in my life. For a minute I got excited because I thought this movie was going to be the first sexploitation scoliosis flick that I know of. Then we have this old wrinkled up lesbian who likes to take her clothes off on the beach. Yuck! So right off the bat this 60's sexploitation flick is pretty damn unattractive. Then there is the fact that it posses as a roughie when it is really nothing more then a very very boring nudie flick. The way they get around this is that the new "actress" is supposed to be staring in a rough flick. So its a movie within a movie and we as the audience get to see the very raw footage of the new film. We get one very tame whipping scene and then a simulated rape scene but the director calls "Cut" before we get to the nasty stuff.

Over 18... And Ready clocks in at just over a hour but it seems like a lifetime is going by as we try to stick it out through the horrible acting and awful sex scenes. In one of my favorite moments the new actress is asked if she can act. She replies "I think so. Besides you don't have to be very good to make it in one of these pictures". Oh boy, she wasn't kidding. If only you could here her deliver those lines. This is basically the same exact movie as A Sweet Sickness, which also wasn't very good but if I was forced to sit through one of these two titles again I think I would have to choose A Sweet Sickness. At least I didn't start to fall asleep through that one.

The only things that stood out in this movie at all is the fact that our leading woman has a shaved... well you know. This is pretty rare for these 60's sexploitation flicks. It also comes complete with a downer ending or at least what is supposed to be a downer. I have to admit the tragedy at the end made me a bit happy. For one, this means the movie is over and secondly I wanted someone else to feel some of the pain that I just endured while making my way through this rough sit.

Email ThisBlogThis!Share to TwitterShare to FacebookShare to Pinterest
Labels: Over 18 And Ready, Roughies, Sexploitation