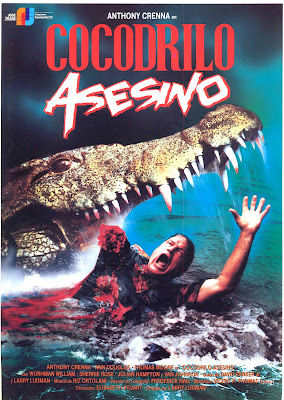 I found this movie sitting on the shelf at my local video store. The cover of the DVD was Japanese poster art and when I flipped the thing over the back of the disk was just a giant review describing how awful the movie is. I read more and learned that Killer Crocodile was not in fact a Japanese movie but an Italian ripoff of Jaws. Naturally I had to see this for myself.

All I know is that who ever wrote that review on the back of that DVD was a total asshole because Killer Crocodile is good gory Italian exploitation at its best.

Yes it is a Jaws ripoff and it has got to be one of the latest ripoffs to come after the wake of Jaws. The Italians have a way of milking every genre for everything it is worth and of course due to the lack of budget they substitute big actors and things of that nature with shit-loads of gore and anything else they can throw in out of sheer bad taste.

When a group of animals rights activists venture out to the murky swamps of some tropical island they learn that the waters are contaminated with toxic chemical waste. Its not long before they learn that the water is also being ruled by the biggest fucking crocodile in cinematic history (I think) and oh how soon these nature loving yuppies shift gears and become cold blooded animal hunters. Killer Crocodile is nature gone wrong at its finest. The Killer Croc rips the limbs from its victims and leaves a gory mess where ever it goes. It attacks men, women, children and even annoying little poodles. This thing also comes complete with a very strange cast and an even weirder wardrobe. The character of the judge likes to yell at people while wearing his fruity little neckerchief. He also comes complete in white wife-beater and white pants. However the best character in the movie is Joe. Joe is of course the Quint character from Jaws reincarnated but Joe is way fucking cooler. He even surfs on the back of the crocodile and stabs the shit out of it while on its back. This scene really has to be seen to be believed. The only thing crazier then Joe's new surfboard is the climax of the movie. You need to see this for yourself and then maybe you can tell me why our Killer Crocodile explodes.

Fans of this movie should be sure to check out Enzo G. Castellari's Last Shark. That one is just as ridiculously fun. 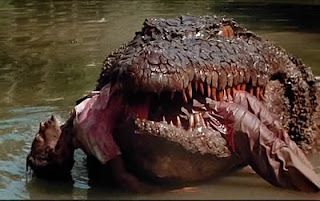