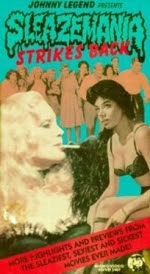 For those familiar with Johnny Legend (Teenage Cruisers) and his 1985 compilation Sleazemania, you get exactly what you expect with this 2nd entry in the series. 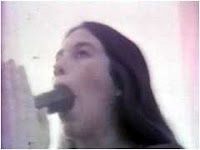 Sleazemania Strikes Back is another composit of filthy trailers, stag films and other bizarre entries in the annals of offbeat and trashy cinema. This compilation throws a bunch of classic Ed Wood trailers at us, such as Gelen Or Glenda aka I Changed My Sex, The Violent Years and The Sinister Urge. We also get a whole bunch of Herschell Gordon Lewis : The Godfather Of Gore trailers such as Blood Feast, Two Thousand Maniacs and a lot of his less gory and widely lesser known stuff such as This Stuff'ell Kill Ya and Suburban Roulette. Its obvious what audience Sleazemania speaks to. Lovers of trashy exploitation flicks from the 30's up to the 80's. Another nice highlight is the trailer for Johnny Legend's Teenage Cruisers.

Check it out for a great time in the gutter with trash film nostalgia. 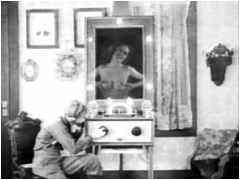